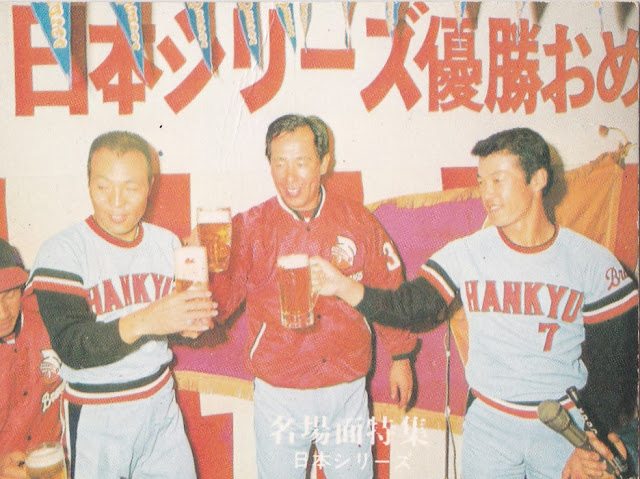 Here is something you don't see everyday: a baseball card with a bunch of beers dead centre in the photo!

My casual Google search for "beer baseball cards" doesn't turn up any other baseball cards with beer visible on them.  I see a lot of 1958 Hires Root Beer cards, and cards of some rookie prospect named Seth Beer and a bunch of doctored fun cards people have made over the years (Rob Deer gets a lot of these since the D in his last name can easily be rendered a B).  But no baseball cards with a beer just casually sitting in the background or anything, let alone three of them prominently featured in the foreground. So unless somebody corrects me (and please do if you find something I've missed) I'm going to go out on a limb and say this is the only baseball card from a regular set in history to ever feature guys drinking beer on it.

This makes sense of course, its definitely not a good idea for a product for kids to feature alcohol on it.  I mean, there must be rules somewhere about that sort of thing.  Right? Anyway, obviously those rules didn't apply to Calbee back in 1977 as this card's existence attests to. 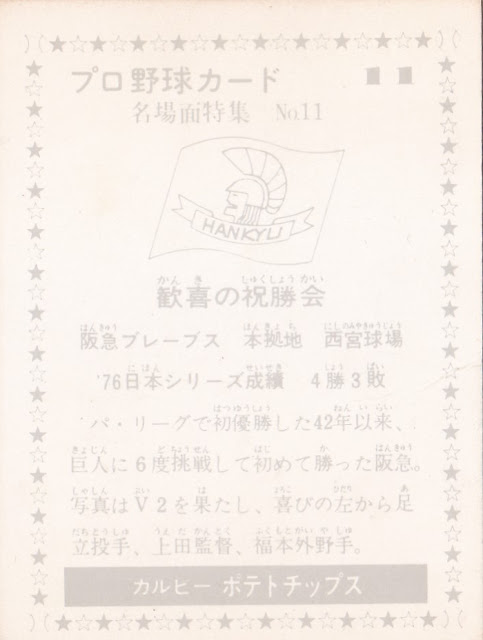 The reason for the beers and smiles all around is that this picture features members of the Hankyu Braves celebrating their victory over the Giants in the 1976 Japan Series.  Pictured are star pitcher Mitsuhiro Adachi  who won the series clinching 7th game, Braves manager Toshiharu Ueda, and series MVP Yutaka Fukumoto.

I am starting to work on this set, so this card is going with the rest of them, but if I can ever track down another copy (these are not easy to find) I'll put the other one in my new "stuff on baseball cards" type collection!
Posted by Sean at 5:41 PM