2020 Calbee Series 2 Has Hit the Shelves 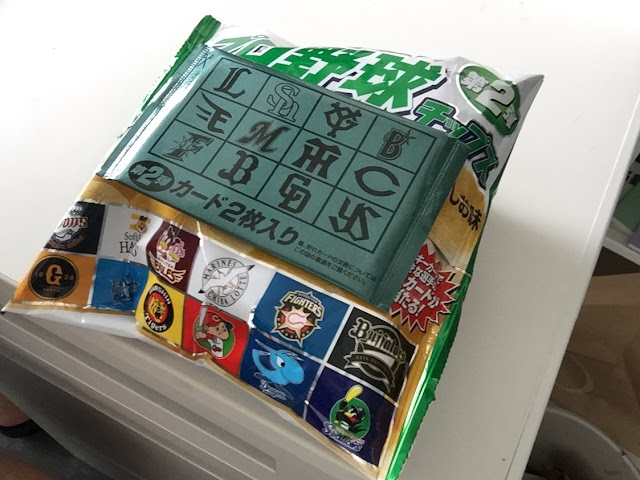 Bags of 2020 Calbee Series 2 have hit supermarket shelves here and I picked up my first bag yesterday.

I like how Calbee sets have been released in 3 series at regular intervals over the year pretty much ever since I first arrived in Japan over 20 years ago.  The release of each series has become a ritualized means of marking the passing of the seasons for me.  Series 1 is Spring, Series 2 is Summer and Series 3 is Fall.  Winter is the only one that doesn't get a series, which adds to my dislike of that season.

Normally the arrival of a new series is a happy event, but this year its just hard to work up the usual amount of enthusiasm. Look at how the world has changed since series 1 came out just a few months ago.  Or maybe not so much, at least here in Japan.  In March infections were rising in Tokyo and I was worried we'd have a major outbreak here.  Thankfully that didn't happen.  This week infections are rising in Tokyo again and we're worried we're going to have a major outbreak.  Again.  Hopefully we won't.  Again.

Of course, when I say "cases are rising" I mean there have been about 200 cases in a city of 30 million people.  I think there are small towns in Florida right now getting more cases.  So I do feel incredibly lucky to be riding this pandemic out in Japan.  Which is another odd reversal since Series 1 came out, back when the NPB season opener was postponed but MLB was still set to go because Japan got hit with this first.  At the time I thought we'd get crushed while the US might get lucky and avoid it.  Man, that has changed. Sorry to my fellow bloggers out there in the US going through all that right now. 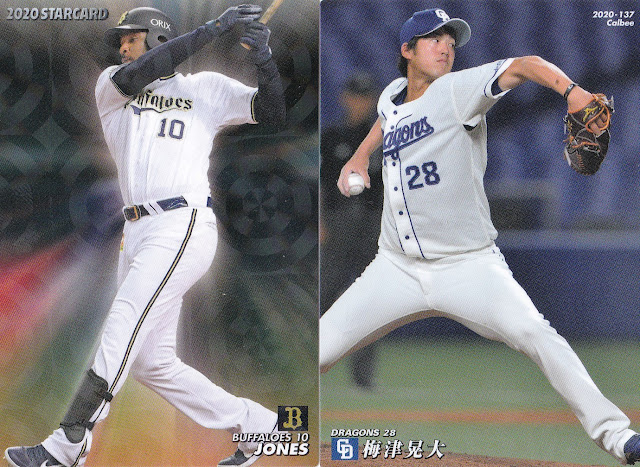 These are the cards I got in my first bag of the year.  Adam Jones, a bona fide MLB star who was fortunate enough to sign a 2 year $8 million contract with the Orix Buffaloes just days before the virus arrived.  That card is from the Star Card subset, which is a pretty decent pull.

The other is of Dragons pitcher Kodai Umetsu, who had a pretty good rookie season last year with a 4-1 record and 2.34 ERA. 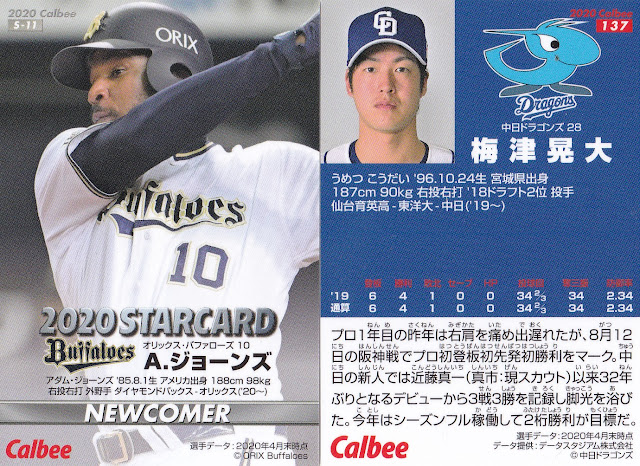 Otherwise there doesn't seem to be much to note, the set looks pretty much the same as it does every year, which is nice.  Good old stable Calbee sets, the one thing that never changes!
Posted by Sean at 8:12 PM