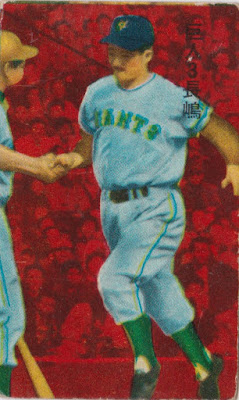 Shigeo Nagashima has a LOT of rookie cards from his first season in 1958.  This is not surprising since unlike his team mate Sadaharu Oh, Nagashima's career caught on fire pretty much right away - he hit 29 home runs in his first season and cruised to the rookie of the year award.

The two of them do make an interesting comparison from a menko era card perspective though.  Nagashima's rookie cards were issued in the 1958 sets, while Oh's came the following year.  I haven't counted and don't know anyone who has, but each of them has several dozen cards from their respective rookie seasons which count as rookie cards.  I'm guessing Nagashima probably has more, since he had an entire 40 card set (JCM 32b) devoted to him in his rookie year, which Oh never had.  Their presence seems to make the sets from those two years a bit more popular than the ones from subsequent years which lacked debuts of players of similar stature.

Having picked up an Oh Rookie card over the summer, I also set about trying to find a cool Nagashima one.  I settled for this 1958 Doyusha card (JCM 30a) which has a pretty cool image on the front of him heading home after rounding the bases on one of those 29 long balls he hit that year.  I kind of like the borderless look of this set too. 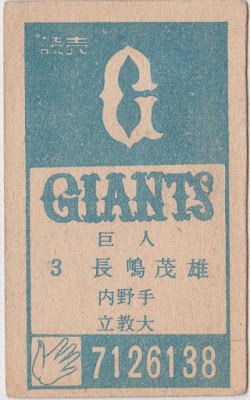 The back is cool too, with Nagashima's name on it and basically the same design as the 1959 Doyusha set which features Oh's rookie card.

Value wise the Nagashima rookie cards are a lot more affordable than the Oh ones, despite Nagashima arguably being the more popular player (in Japan at least).  This probably reflects the purchasing power of American collectors who are way more likely to go after Oh cards than Nagashima ones.  It also probably reflects the fractured collector interest that having dozens of rookie cards creates.  Individually they are all pretty scarce, but collectively there are a lot of them out there without any one being considered a "definitive" card that collectors can focus their attention on with laser like precision.  So if you've got 10-20$ and a bit of patience you can probably score a Nagashima rookie card on Yahoo Auctions when one shows up!