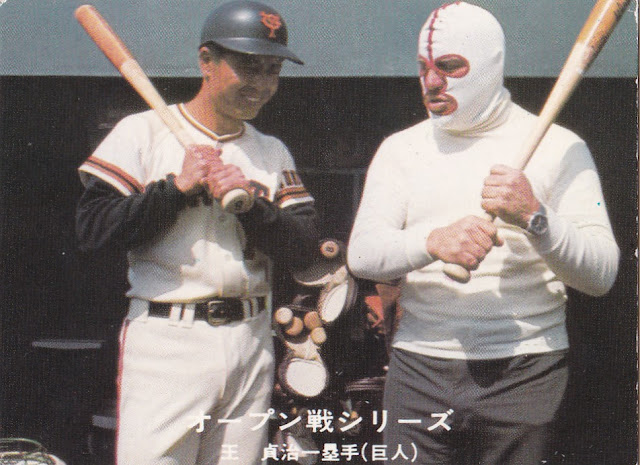 I like this card.  Its probably one of the most famous Calbee cards from the 70s.

This is card 178 from the 1977 Calbee set which Engel catalogues as JC 5(a-j).  As I noted in an earlier post there are eleven different Calbee sets from that year, so its pretty hard to keep track of which is which.  This series has the weeds on the back border.

This was another one of those white whales that I've been chasing around for a while.  One seller on Yahoo Auctions has had a copy of it for a while with a BIN price of about 800$ which is insanely overpriced (Engel lists it at 80$).  Its a very popular card so that has been the only copy of it I've seen for sale for the past couple of years, but recently somebody put a lot of a couple dozen Calbee cards from the 70s up which included this and I put a high bid in and won (for less than the 80$ this card alone lists for).  I was so excited.

The card features Sadaharu Oh on the left and Dick Beyer, AKA the Destroyer, on the right.

The Destroyer is a really interesting guy.  He was a wrestling star in the US in the 50s and 60s, going by various identities before settling on his mask wearing Destroyer persona.

He has an interesting connection with the post I wrote last month about Hankyu Braves star Roberto Barbon, who as I mentioned had a run in with a Japanese wrestler named Rikidozan who was later stabbed to death by a Yakuza gangster.

After a match with Giant Baba in Los Angeles in 1963 the Destroyer came to Japan to go head to head with the same Rikidozan.  You can watch their match here:
Incredibly that match took place on December 2, 1963, just 6 days before Rikidozan received his fatal stab wound.  I'm not sure but it was probably his last time in the ring.

After that, the Destroyer went back to the US for a few years.  But in 1973 he returned to Japan and spent most of the 1970s here, both as a wrestler and as a major TV personality.  Definitely WAY more interesting than his wrestling is his output as a TV talento.  Here you can see him freaking out Wada Akiko and contributing to the general chaos and mayhem of a 1970s Japanese variety show, which is.....hard to describe in words but definitely worth watching:

My card of him with Sadaharu Oh would have come out at the height of his fame on Japanese TV and I assume he was at Korakuen for some sort of TV event. 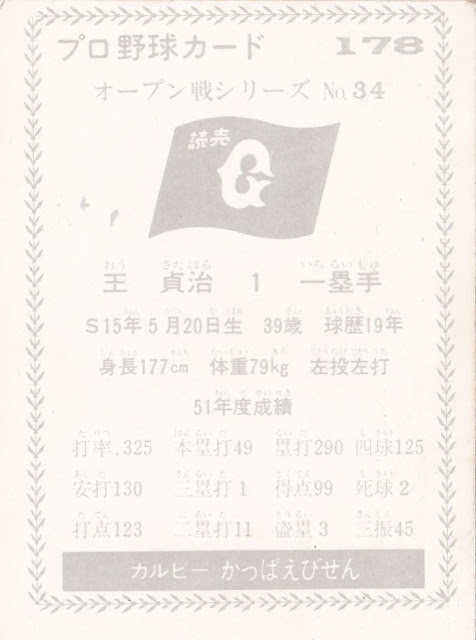 One weird thing about this card is that it is a straight up normal Sadaharu Oh card.  The text on the front and back just mention Oh, but doesn't say anything about the guy he is standing next to.  Its basically a cameo appearance by the Destroyer on an otherwise normal Sadaharu Oh card.  Even in Engel card #178 is just listed as "Sadaharu Oh".  I get that this is a baseball set, but come on ,there are hundreds of Sadaharu Oh baseball cards out there, but only one with the Destroyer on it!  This deserves some sort of mention.

Anyway, after retiring from wrestling in 1984 he went back to his regular job as a high school PE teacher in Akron New York.  Before becoming a pro wrestler in the early 50s he had trained as a teacher, and in fact had a Masters in Education from Syracuse University.  That must have been pretty cool for Akron high school students in the 80s and 90s to have a guy with such an interesting background as a teacher.  Well, maybe, I could also see how having a teacher called "Destroyer" would be somewhat intimidating.

In 2017 he was awarded the Order of the Rising Sun for his contributions to cultural exchange between Japan and the US.  He passed away last year at the age of 88.