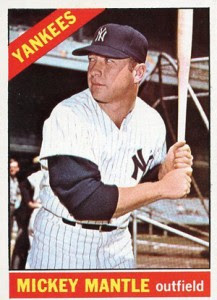 One of the sometimes-acknowledged but usually put-putted issues facing the American baseball card hobby is its demographic problem.  This is often approached as a problem of there not being enough young people entering the hobby, but it can also be viewed from the opposite perspective: there are an awful lot of old collectors around.

I was thinking the other day that this is probably going to be the thing that results in the next baseball card market crash.  The baby boomers are the generation of collectors that really started the modern hobby - revisiting nostalgic childhood memories from the 1950s when they reached adulthood in the 1980s.  Its probably no coincidence that the baby-boomers hitting their peak earning years coincided almost exactly with the explosion of vintage card prices in the period from 1985-1992 (there is a pretty good analysis of that here).

Its also probable that the vast majority of baseball card wealth (big vintage collections worth lots of $$$) is currently in the hands of baby boom collectors.  The subsequent generations (Gen Xers and Millenials) generally came along after the market had exploded and thus had limited means of entering - partly because the prices had risen so high on the back of boomers hoovering up the stock, and also because of the general erosion of middle class incomes that limited their disposable income.  With Millenials in particular you also have the fact that collecting baseball cards in general is an activity that they found less appealing in their childhood.

The "problem" (if you want to view it as such) is that the boomer generation is going to be hitting its natural life expectancy within the next 10-20 years, which means that ownership of huge volumes of vintage baseball cards are going to be transferred into estates whose beneficiaries are largely going to be made up of Gen Xers and millenials.  While some of those people may be collectors themselves who decide to keep them, I think it is safe to say that a large majority of them will be entering the market since most people don`t share the same interests as their parents and, even among those who do, sitting on piles of cards worth thousands of dollars may not make financial sense.

So we have a situation now where the market is set to be flooded with vintage cards within a relatively short time frame, and with the people who until now had been most likely to buy them (baby boomers) no longer around to keep demand up. Its hard to come up with any scenario in which prices for most vintage cards do not collapse when this happens.

Since baseball card collecting is a relatively "young" hobby, it has no experience with this (its founding generation dying off), so its hard to predict exactly how it will play out.  The dynamics of a market crash based on a big demographic shift like this are likely to be way different from those associated with the previous market crash of the 1990s (caused by a lot of things but mostly over-production by card-makers). If you look at older collecting hobbies like stamps though it looks pretty simple - the stock in online auctions and brick and mortar stores is almost entirely made up of estate sales (very easily identified since they are often sold as such).  A collecting hobby where the market is dominated by mass dumping of lovingly built up collections of old and hard to find pieces is way different than a hobby in which the market is dominated by intra collector sales and trading (of course estate sales are also a source of cards even now, but on nowhere near the same scale as in the stamp collecting hobby).  Prices for everything outside of the very elite stamps have collapsed (in fact several times over the stamp collecting industry`s long lifetime), including on a lot of stuff that was once considered high end.  Probably something similar will happen with baseball cards.

When the baseball card world enters that phase when the market is little more than an estate-sale dumping ground (and I don`t see any way of avoiding it), prices will be affected accordingly.  My general predictions are:

Pre-war cards (tobacco, Goudeys, etc): Prices on this stuff might actually be relatively unchanged since supply is so low and there is probably enough latent demand for it among the "elite" collectors with cash to burn.

Modern stuff (post 1980): Most of this stuff is worth so little now that prices probably won`t change much.  The contrived scarcities of some parrallels, etc follow a different market logic than vintage stuff, so I`m not sure how they will be affected (long term I view them as having a value of zero, but I don`t think they will realize that price collapse because of the baby boomers leaving the hobby).

Post-war vintage (1948-1979):  This is where I think most of the collapse in prices will happen, particularly for sets in the latter years of this era.  Partly this is because these are the cards that boomers themselves prized the most - the prices they command is partly a result of the boomer nostalgia factor, which will become irrelevant in the future.  Partly its also question of numbers: this stuff is way less common that post 1980 modern stuff, but there is still a lot of it out there as any random Ebay search (or of PSA population reports) will reveal.  Stuff from the late 40s/early 50s might not be too badly hit since there are fewer of them out there, but for sets from the 60s and 70s where there are probably 10-20 thousand copies of most cards still in existence (except for some high number series) the prices will probably drop pretty far. How far I`m not sure, its equally possible they might drop only 10-20% or that they really collapse by 90% (or that different cards fall at different rates).  It depends a lot on how many new collectors come along to stimulate demand (once prices fall and the hobby becomes more affordable it might become easier to entice people into it, which will stabilize prices at some point).

An interesting side question is whether the passing of the boomer generation might resolve some of the odd relative price discrepancies that exist in post-war cards.  The comparative value of Mickey Mantle and Willie Mays cards is usually held up as example #1 in this regard - by most measures Mays was the superior player (perhaps the best of all time) but Mantle`s cards are always valued several times higher.  This price differentiation is based solely on the fact that baby boomer kids in the 1950s and 60s were much more likely to be Mantle rather than Mays fans.  For post-boomer collectors this factor is probably way less important - personally as someone who grew up after both players retired I find myself much more interested in Mays cards than Mantle ones.  My prediction is that most post-war vintage cards will go down in value, but I`m thinking Mantle cards in particular will see their values level off at a greater rate than other stars from the era.  The 1952 Topps Mantle might be an exception since the market for that one follows a totally seperate logic than that for any other post-war card.  But I don`t see a more run of the mill Mantle card like his 1966 Topps one continuing to command 3-4 times what 1966 Topps cards of similar or even superior stars from the era (Mays, Aaron, Clemente, etc) go for.

I guess this story can be interpreted in two ways.  If you want to build up a big collection of post-war vintage cards then just wait - they`ll probably be a lot cheaper in a few years than they are now.  Conversely if you have a big collection of post-war vintage cards, now might be a good time to sell - its hard to see how prices on those will go anywhere but down.
Posted by Sean at 6:41 PM