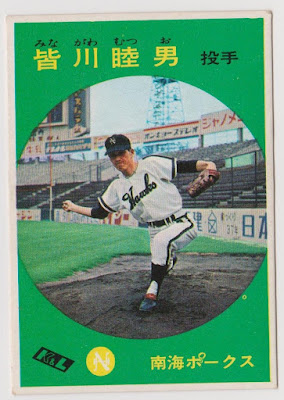 I finally picked up my first card from the 1967 Kabaya Leaf set.  NPB Card Guy did a pretty good write up about the set a few years ago here, it seems that many of them were exported to the US and thus they are actually pretty hard to find here in Japan and they are quite expensive when they do turn up (hence it taking me so long to get my first).  I won't go into the details of the set much since you can read NPB Card Guy's post, but suffice it to say this is probably the first American style Japanese baseball card set, with a design similar to the 1959 Topps (though there are two design templates, the other looking a bit more like the 1963 Fleer set).

I absolutely love the design of these cards and this one of Hawks pitcher Mutsuo Minagawa drew me in quickly - I love that photo with all the advertising billboards in the background.  It really looks like something out of 1960s Japanese baseball (which it is) in a way that most posed shots fail to capture.

I picked this one up extremely cheap.  Despite looking about EM on the front, the back looks like this: 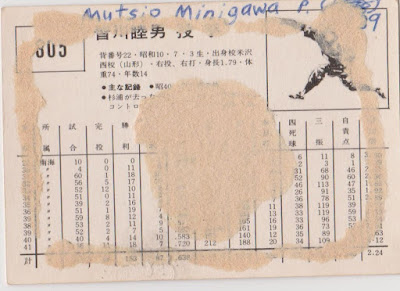 Ouch - the double whammy of glue AND writing in pen.  Thanks to some kid though (perhaps an American, given that they wrote his name in Romaji) I paid about 1/10th what a non-defaced version would have cost me.  And I just wanted it for the front anyway, so its a nice addition to the collection.