More (not) Autographed Bats From the 1979 Calbee Promo!!! 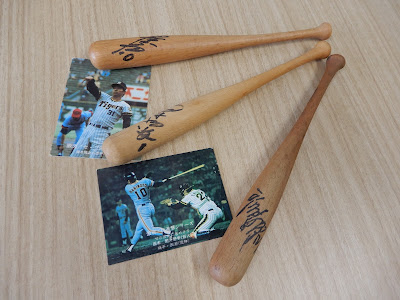 I've had to edit this post a bit. I thought these things were really autographed, but it turns out they are printed signatures on them (see comments). Doh! Still a cool item, but not THAT cool!

Isao Harimoto was the first I acquired and I've already written about it (his is the top one in the above photo). This week I added two more to the collection: hall of famer and former manager of the Chunichi Dragons Morimichi Takagi (middle bat in the above photo) and former Hanshin Tigers all star third baseman Masayuki Kakefu (bottom bat in photo).  All three have come courtesy of Yahoo Auctions, the Takagi from the same guy who sold me the Harimoto and the Kakefu one from a different seller.

The Takagi one is particularly interesting since it isn't in the Calbee collector's collection and thus not on the list of known ones I am compiling, so I can add him to it.  The list of guys who have bats are:

My enthusiasm for these has waned a bit now that I know they aren’t actually signed, but they are still pretty cool items for the collection!