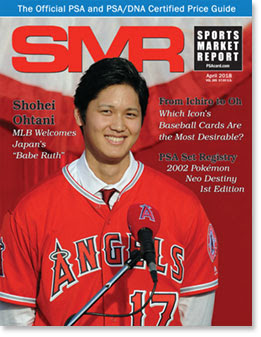 As Dave over at Japanese Baseball Cards recently posted, the current Sports Market Report (PSA's magazine) is almost entirely devoted to Japanese cards, which is really cool to see.  Kevin Glew wrote most of the articles and interviewed me (and some other much more established people in the hobby, including Dave) for this one that is mainly about Calbee cards which has a few quotes of mine sprinkled in it.

Its great to see the Japanese card hobby getting this kind of exposure and the articles do a good job of outlining the basics of the hobby and comparing it to that in the US.  There is also a great article by Mark Holt about the 1967 Kabaya Leaf set which had a lot of tidbits of information I didn't know about it (I have 2 cards from the set, so pretty early in putting that one together).

As a Calbee collector I have my biases which I've elaborated on here before.  I wonder if this might spur some mutual recognition between PSA and Calbee collectors.  Their Population Reports indicate that almost nobody gets Calbee cards graded - the iconic 1973 set which is mentioned in the article for example has only had 46 cards graded according to their listing, and they only identify cards which have been graded so they don't even seem to have a complete checklist of the set (other sets are similar, the only exception seeming to be some Ichiro and Nomo Calbees from the early 90s for obvious reasons).  I'm not a collector of graded cards, but I do use PSAs website as a useful resource and it would be nice to see the Japanese side tidied up a bit!