Catching the Calbee Pack Breakers: New Rite of Spring (and mid-late summer too) 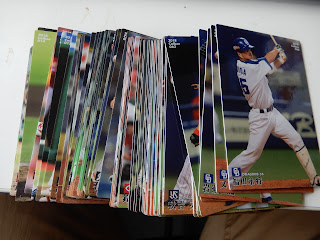 Its barely mid April and I have already completed the first series of this year's Calbee regular cards!

Well, at least I have all the cards in the first series,  it might be unfair to claim that I completed it.

In recent years something which I have mixed feelings about has emerged in the Calbee card collecting world: guys who buy Calbee cases in bulk, bust open all the packs and re-sell them on Yahoo Auctions.

These guys are both a godsend and a curse.  They are a godsend for set collectors like me because the regular cards are not central to their business model.  They just put those together in big lots, sometimes as complete sets, and sell them for peanuts - I paid about 700 Yen including shipping for the entire first series, which would have cost me hundreds of dollars if I had tried to do it by buying bags of chips like I used to.  So there are huge economic efficiencies to be realized by sourcing your Calbee cards from guys like this.

I bought mine from a seller called mri_11k13, you can see his listings here.   As you can see from his listings, which are almost entirely 2018 Calbees, the real money they make are from selling the gold signature parallels, which they sell for about 1000-2000 Yen each.  The regular cards are loss leaders which they just want to get rid of and are priced accordingly.  For a base set-collecting guy like me who has zero interest in the inserts and parallels, this is sort of wonderful.

But it also sort of isn't, which is why I say they are also a curse.  Now that I have all the cards, I have no incentive to go out and try to track down bags of chips in convenience stores like I used to.  Putting the set together is really the main fun part of collecting, simply having the set is actually kind of boring.

This is of course exactly the same complaints that I remember hearing as a young collector in the 1980s from older guys who bemoaned the existence of factory sets as spoiling the fun.  They were right.  Another one of the things I love about Calbee is the lack of factory sets!  But now there exists a de facto equivalent thanks to these wonderful, horrible, great, terrible re-sellers.

Anyway, I started putting my Calbee sets together primarily through buying from guys like this on Yahoo Auctions about 3 years ago simply because the bargains are too good to resist.  In the past I've generally preferred to buy semi-complete lots rather than full sets like this one so that I at least had a bit of actual collecting to do. This one was more of an impulse purchase that I almost regret, maybe I could send ten random cards back to the guy or something so that I can have an excuse to go buy a few bags of chips and then feel happy when I get one of the cards I gave back.

If you are interested in getting Calbee sets on the cheap from these guys it is worth noting that you have to strike while the iron is hot.  They only do this when a new series comes out and when they sell out (of the cheap regular set lots) they basically disappear from Yahoo Auctions altogether.  So if you want a first Series set of 2018 Calbee now is the time to get it.  You can't find such deals on 2017 or 2016 sets anymore (I just checked!) So waiting for these guys to put the Calbee cards in big lots on Yahoo Auctions has become a new rite for me along with spotting the first Calbee cards on store shelves.  When Series 2 comes out I'll be waiting for both.

Oh and the cards this year, as I mentioned in an earlier post, are pretty awesome. I love the kanji on the card fronts!  Flipping through the cards I noticed that three of them picture players holding up signs commemorating career achievements - Nobuhiro Matsuda of the Hawks (nickname is pachi-pachi because he has this eye twitch) for hitting his 200th home run and Shinnosuke Abe and Masahiro Araki for their 2,000th career hits.