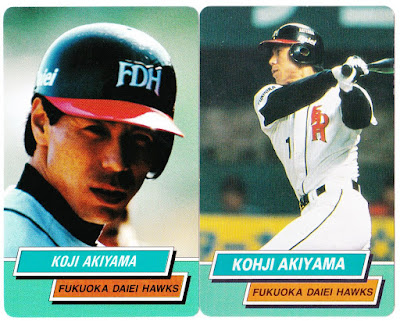 One set I have been adding a few cards to recently is my 1995 Tokyo Snack set.

1995 is a confusing year in Calbee baseball card history because they had two sets that year but also didn't have any sets that year.  Due to a potato shortage they released their cards with popcorn instead of chips.  But their popcorn was sold under the Tokyo Snack brand, so these are labelled as Tokyo Snack rather than Calbee cards.

They also released a 72 card regional set under the Choco Snack label that year in the Tokyo and Saitama areas in 1995 so they did two sets,but neither of them were attached to Calbee potato chips (though the Choco Snack set does say "Calbee" on the back")

The Tokyo Snack set is the larger of the two with 162 cards issued in two series (1-72 is first series, 73 to 162 is second series).  It is also the one I am working on, the Choco Snack cards will wait for another day.

The Tokyo Snack set is kind of hard to find, but the second series (which unfortunately constitutes the majority) was short printed and is significantly more expensive.  I have about half the first series now but only a few of the second series.

One of the second series cards I recently picked up is #158 featuring Hawks Hall of Famer Kohji Akiyama.  I though this looked weird and on looking through my first series cards I found another one of him (#67) but with his name spelled differently - Koji Akiyama.

I though this was kind of funny - this must be the only time a guy appeared on two cards in the same set but with his name spelled differently and neither of them being an error.  The problem arises because there is a lot of confusion with respect to how to Romanize his first name and both cards are within the bounds of reasonable interpretations.

His first name is 幸二（こうじ）which if you spell it out the normal way would be Kouji.  But that looks a bit odd, so Koji is probably better.  Adding an "h" to make it Kohji is also a possibility but looks kind of awkward.

This is probably just a minor bit of sloppiness that occurs when you have two different guys writing names down rather than a deliberate attempt to update his name spelling in the second series, but its kind of cool.