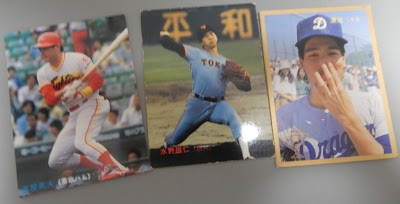 Every year for the past four year I have made a new year's resolution to finally finish my 1987 Calbee set.  This year for the first time I am actually making a serious effort to make that happen.

Most of the cards I still need (11 out of 18) are in the short printed series that runs from numbers 51 to 100, which are noticably harder to find than the rest.  They sell for a bit of a premium but are not outrageously expensive like the short printed series in some other Calbee sets from the 70s and 80s, which is one of the things that makes the 1987 set do-able (though still difficult).  The middle card of Mizuno in the above picture (#98) is from that series and set me back just 400 Yen  (its in a bit lower grade though).

Of the cards outside that short printed series, some of them may also be harder to find, at least based on my experience.  Card #346 (right card in above photo) is not short printed but I hadn't seen one in years of regular searching on Yahoo Auctions until last week.  Other set collectors must also be after it because I got into a minor bidding war over it which bumped the price up to 340 Yen.  OK, that isn't exactly a lot (about $3) but the going rate for 1987 Calbee commons outside the short printed series is usually closer to 100 Yen, so there was some additional interest in that one which drove the price up a bit.  The same holds for card 222, which I bought I also bought a little while ago after finding one for the first time in years and ended up getting into a mini bidding war over. 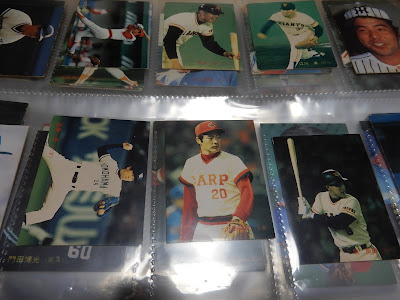 Anyway, my set is tantalizingly close to completion.  Which has me considering how I am going to store it - a problem for all 1980s Calbee collectors owing to the small size of the cards (about the same as 1950 Bowmans).  At the moment I have them in 10 pocket pages (pictured above) that I bought at the 100 Yen shop.  These are completely inadequate since the cards are constantly falling out of the big pockets (and they don't really look good in there either).  I'm not too sure if there are any album pages out there that are the right size for these.  I have the same problem with boxes, which are all designed for standard sized American cards that are about twice the size.  Anybody out there have any tips on storing 1980s Calbees?

This is my want list for the set, if any of you have these I am VERY interested in them.


There is actually a complete set of these that is up for sale on Yahoo Auctions right now for 145,000 Yen (about 1300$ US).  That works out to roughly 350 Yen or so per card.  They look like they are in pretty good shape (in keeping with Japanese collectors lower level of concern with condition the seller is very vague about this, just noting that they are mostly in nice shape except a couple that have writing on them).  Unless I way overpay for my last 18 cards though I'll have put mine together for a lot less than that.  My set is probably what would be called "mid grade" with cards ranging from good to near mint, probably averaging in the vg/ex to ex range for most of them.

Email ThisBlogThis!Share to TwitterShare to FacebookShare to Pinterest
Labels: 1987 Calbee