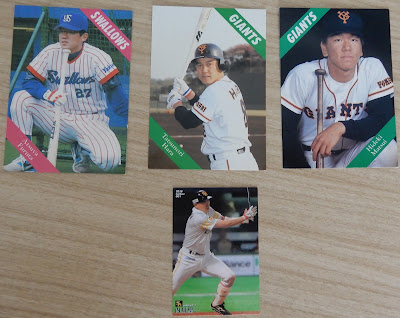 I have added another oddball set to my collecting aims: 1993 Calbee Big Size cards.  I won three of them - Hideki Matsui, Tatsunori Hara and Atsuya Furuta,  in an auction last week and they arrived in the mail today!

As the name implies, the set was issued by Calbee, in 1993, and the cards are big size.  Other than that I can't tell you much about them.  I assume they were some sort of mail-in prize that Calbee gave out that year, but can't say that for 100% sure.

There are 27 cards in the set (they are numbered "8/27"etc on the back) but I'm not sure about the entire checklist - Hideo Nomo also has a card in it and a few other big name players seem to as well, though no Ichiro.  The designs of the cards are the same as the regular 1993 Calbee on the front, the backs are slightly different in that they say "1993 Big Size Card"across the top. 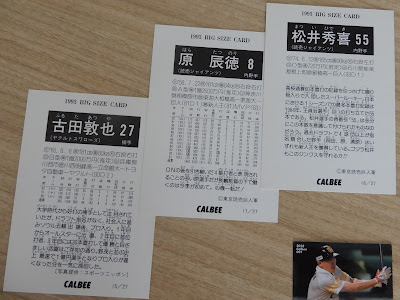 The cards are big but not huge.  I wasn't sure what to expect when I ordered them since there was nothing in the photos to provide scale, but they are about twice the size of a regular Calbee card (I put a 2018 Calbee card in the photo for comparison).

From what I can tell, Calbee also did a Big Size Card set in 1990, though unlike these it has a distinct design from the regular set of that year (which itself had two quite different designs).  Those are the only two years for which Google searches for Calbee Big Size Card turns up anything, so I assume they are the only years Calbee did this (edited to note that they made them in 1991 as well according to NPB Guy, and also there was a set in 1992 - there are some pictures of them here!).

The Matsui is probably the key card in the set since it is from his rookie year.  I'm not sure if it counts as a technical "rookie card"since it isn't from the base set, but its pretty cool.  These cards seem to be quite a bit harder to find than the regular 1993 Calbee set, which itself is pretty hard to find.  There are only a few up on Yahoo Auctions and nowhere near enough to put together a list of all 27.  Intriguingly this listing here for a Shigeo Nagashima card from the set comes with a mini plastic  frame that is the right size for the card.  The listing doesn't say so but I wonder if those little frames might have come with the cards as part of the promotion.

Anyway, at 27 cards this seems like a set that shouldn't be too hard to complete even if they aren't easy to find, so I'm putting it on my "to-do"list!

Based on the Calbee collector website (in Japanese) who has most of the cards in the set, I've been able to put together a checklist of most of the cards in English below (some only have last names because I can't make out their first names, cards number 8, 22 and 26 I still don't know) for those of you who decide to follow me down this collecting wormhole: