Calbee was (almost) way ahead of its time: 1979 Calbee (not) Autographed Bats! 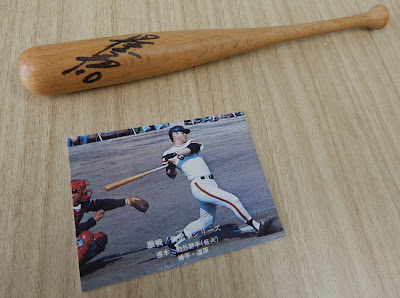 The thing I love about collecting Calbee, and vintage Japanese baseball cards in general, is that every time you think you have already found all the awesome old stuff there is to collect you find something new to fall in love with.

In 1979 (and possibly also 1978) Calbee ran what was probably their greatest promotion ever.  If you were lucky enough to find two randomly inserted "Home Run Cards" in packs then if you sent them along with 300 Yen to Calbee you would get an autographed ball of an un-named star player.  I originally thought these were really autographed, but it turns out they are facsimiles. If you only had one Home Run Card you could send that in and get an autographed mascot bat of an also un-named star player.  You can see a picture of a 1979 Home Run card which describes the promo on this post by Ryan.

I only really became aware of these last week when I was looking up info on the Calbee collector's website and stumbled onto his amazing list of Calbee promo items over the years, which included photos of his awesome collection of balls and bats that were redeemed in 1979.  I knew that I had to get one!!  The bats in particular are so awesome!

So I went auction hunting and found a beautiful one of none other than all time hits leader Isao Harimoto!  It arrived yesterday and is the awesomest-est thing I have in my Calbee collection now.

According to the Calbee Collector there might have also been the same promotion run in 1978, though I haven't seen any 1978 Home Run Card to confirm that.

The bats aren't big, I put a card of Harimoto from the 1975-76 Calbee set in the above photo for scale.  There isn't any definitive checklist of players who are in the set there that I know of, but Calbee collector has the following ones so we at least have a partial list. The list is pretty heavily skewed towards Giants players but given the era that is typical.