Train Menko are so Awesome

Its a bit off the baseball theme of this blog, but I scored a really cool uncut sheet of train menko the other day and I feel obliged to post about them because they are so awesome.
The sheet, which doesn't quite fully fit into my scanner, has 25 cards, though 3 are duplicated.  All but one of them feature real passenger trains which were in service in the 1950s and 1960s (the other one featuring a JAL airliner).  It has an 0 Series Shinkansen which entered service in 1964, so it probably came out no earlier than that, while also having a number of steam engines which were removed from service around the same time so it probably came out pretty close to that year. 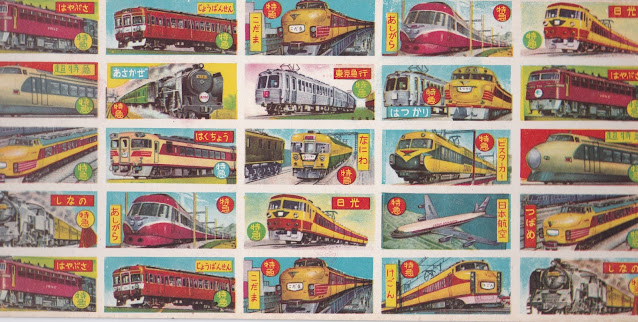 Each of them has the name of the train (trains all have names here) in the rectangular box text, while the circular boxes all have the kanji for "Tokkyu", which means "express" in them.  That seems to be the unifying feature of this set, the trains are all high speed express ones rather than local commuter ones.

This is a really beautiful set, the cards are vibrantly colored and the images jump out at you, which is what caught my eye when I found them while browsing Yahoo Auctions. 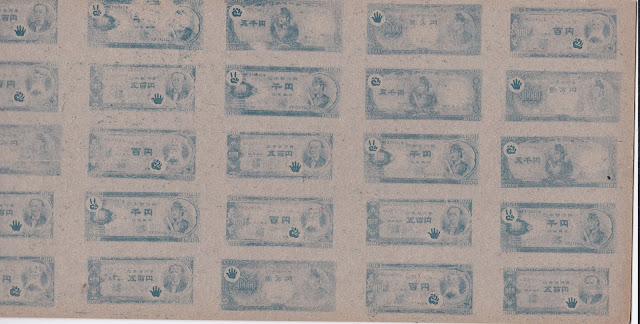 While all of the engines featured on these cards are retired, a lot of the train lines (and thus the names) still exist.  Several of the ones featuring what look like regular passenger trains are now Shinkansen lines running the same routes and using the same names (like the Kodama, top row, centre column on the sheet).
I think I might get this thing framed and put on a wall, I like trains:)