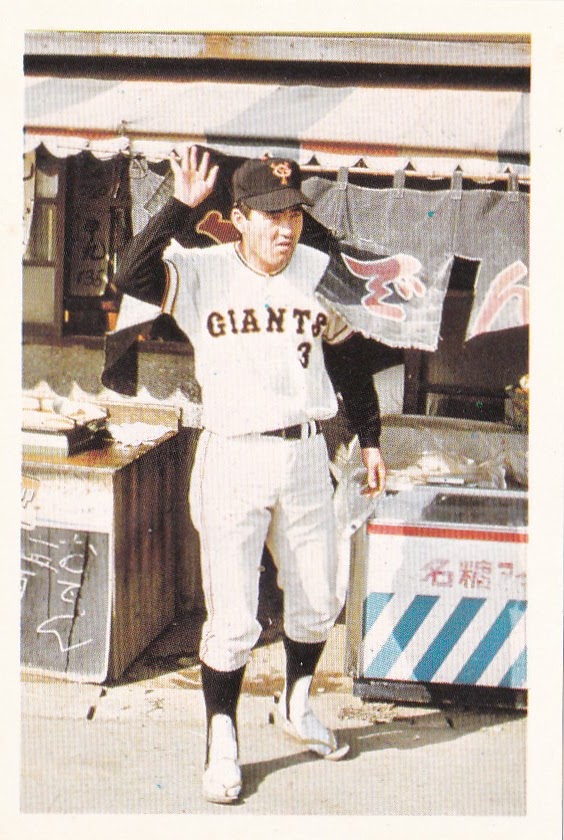 I've decided to make "Stuff on cards" a regular series on my blog, highlighting odd things that have appeared on Japanese baseball cards over the years.  Today's post: Oden shops.

This is card 55 from the 1975 NST set.  NST issued a few sets between 1975 and 1983.  Their sets were intended to be glued into albums (sold separately) so they are printed on thinner card stock than normal cards and the backs just have the card number and instructions on how to paste them into the albums, which contained more info about the player.  Dave has a good write up with more info about the sets here.

One thing I like about the NST sets is that they have a lot of  interesting photos.  Probably about 80% feature in game action, while the remainder feature random candid shots, often of players off the field in oddball situations which you almost never see in sets from the 70s (or other decades).

This one featuring Shigeo Nagashima is one of my favorites.  He is just walking out of an oden shop.  If you've never been to Japan, this is what oden is (photo courtesy of the Wikipedia page for Oden): 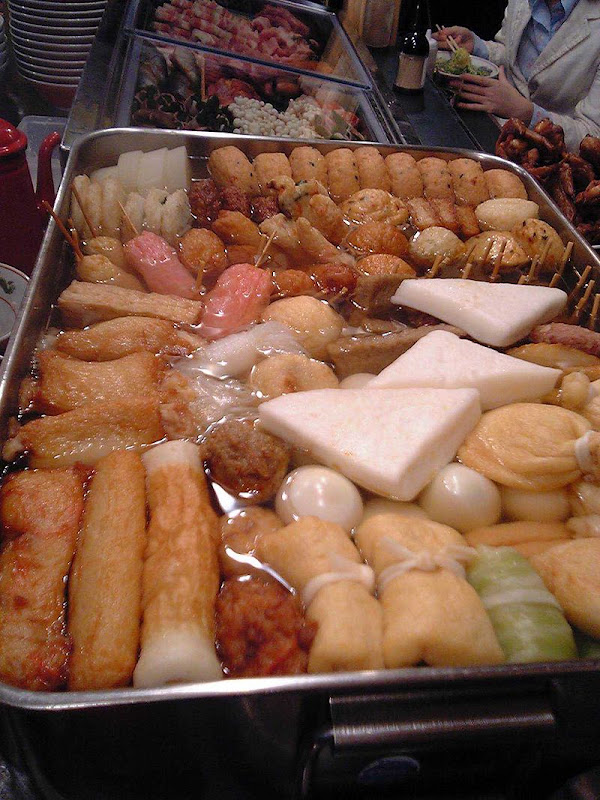 I have  strong dislike for oden.  Everything in there just runs afoul of too many of my "I won't eat that" red lines - texture, taste, smell, appearance - nope, nope, nope and nope.  But its very popular here. 7-11s and other convenience stores in Japan don't have Slurpee machines, but they do have oden vats very similar to the one pictured above where you can scoop out whatever you want.

You can tell Nagashima is leaving an oden shop because the noren curtain he is emerging from says "Oden", as does the writing on the chalkboard to his left.  So I guess Shigeo Nagashima likes oden, which is not surprising since, as I said, its popular here.

Also though you have to kind of scratch your head about this photo - when was this taken?  They don't have oden shops like that in stadiums, this looks like a shop on some random street.  But he is in uniform and ready to play....except.... look at his feet!  He isn't wearing cleats, he is wearing geta (a traditional type of sandal that is made of wood)!  How is this allowed?  The manager of the Giants is not properly dressed in his uniform!

I mean, when he went into the oden shop he likely would have had to remove his shoes, but normally he'd just put them back on again when he left.  Geta are not something you have to wear to an oden shop or anything so its really odd.  Maybe he forgot his cleats, or a fan stole them and he had to borrow these?  Or there was some special event going on which for some reason involved both visiting an oden shop, wearing his uniform and wearing geta.  But I can't imagine what that would have been. This is just odd all around!