Baseball Card Collecting in the Age of the Coronavirus 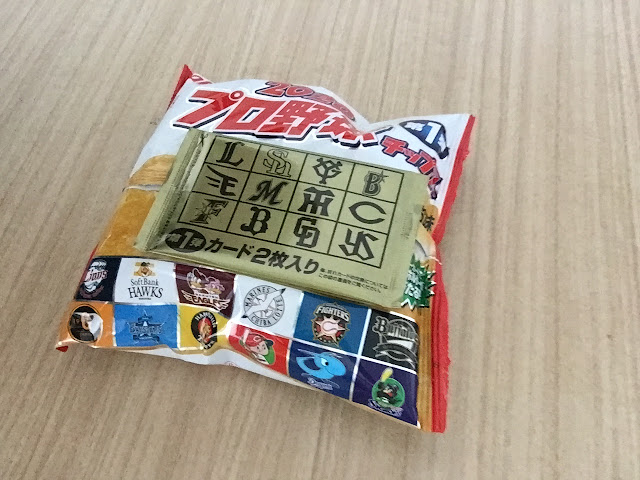 So I picked up my first bag of 2020 Calbee chips yesterday.  Normally this is my favorite time of the year: the first bags of Calbee chips signify the start of spring and the new baseball season.

This year.....yeah, they are coming out in the middle of a global pandemic that is screwing the world over in ways we couldn't have imagined just a couple months back.  So its a bit of a downer this year.

But life goes on and I am quite lucky that I'm safe and healthy and haven't lost my job (knock on wood).

I've been thinking a bit about how this pandemic is going to affect the hobby.  It could be either beneficial or disastrous for it, or a bit of both depending on your perspective.

On the one hand, a lot of people are  under some form of lockdown and most of those who aren't are (I hope) at least doing their best to maintain social distance from others.  Fortunately neither of these are incompatible with our hobby.  Its not like competitive arm wrestling where we really have to stop what we are doing right now.  In fact, people having a lot of time at home is a positive boon to hobbies like ours since "time alone to sort cards" is an essential element of it.

There is of course also a social element to it, but that doesn't necessarily require being in the same room with people.

So the hobby is good to go.

But then there is the other thing.  The scary virus and the chaos that it is raining down on the global economy and shutting down businesses left right and center.

This is either going to expose our hobby's Achilles Heel and destroy it, or it is going to save it from the problems that currently plague it and make it even better than before (once the big scary virus has passed, of course).

Cards cost money.  People are going to have way less of that this summer than they did last.  People are losing jobs or having hours cut, and their retirement funds are being decimated by the stock market collapse.  Cards are also not toilet paper that people will irrationally throw what money the have remaining at because, apparently, in times of crisis we quite literally prioritize our own asses above everything else.

So a lot of collectors aren't going to have money to spend in the near future, which will likely lead to a sharp drop in demand.  At the same time, people are going to need more cash and those who have collections are going to be very tempted (or perhaps forced) to sell them, which may lead to an increase in supply.  If this happens I don't see any way that such a situation will not lead to a drastic decline in card values.

From my own perspective, I'm putting a halt to all card purchases over 1000 Yen (about 8$) for the foreseeable future.  I'm by no means a big spender, but I do tend to buy cards in lots that usually sell for more than that, so this means I'll be doing way less card shopping.  And, like I said, I still have a job and am not in dire straits right now.  But the uncertainty surrounding all of this and the possibility that I might end up in that situation down the road is forcing me to re-arrange priorities rapidly, with card spending going way to the bottom of the list.  I suspect a lot of people are in the same boat right now.

If I'm right on that it means the hobby is going to be starved of cash in the very near future, something likely exacerbated by the fact that the baseball seasons (both MLB and NPB) are likely to be cancelled, which can only further dampen interest.

Is this a bad thing though?  I mean, if you've got a lot of money invested in cards then yeah I guess it would look like a really bad thing.  I wouldn't put myself in that category, but I do have a few valuable cards around that I'm realizing are probably going to be worth a fraction of what they are worth now in a few months.  And that is kind of a bummer.  And if you make a living selling cards this has to be extremely worrying and I really have a lot of sympathy for those who do right now.

But one could also argue, and a lot of people have been arguing for years, that the money has ruined the hobby in so many ways that scaring it off isn't a bad idea.

Card trimmers no longer able to make a living out of scamming people?  Nobody caring about the difference between a PSA 9 and a PSA 10 anymore?  Maybe even PSA going bankrupt?  The schadenfreude associated with seeing millionaires selling off their vanity collections and only getting a fraction of what they paid for them?  There are definitely a lot of people out there who would welcome these types of things.

This isn't necessarily to say those would be entirely good outcomes.  Nobody would miss the card trimmers, but they are really only a few bad eggs out there and a lot of good people would be hurt in the process.  And PSA for all its faults (of which there are many) also has a useful function to play.

We are in interesting times now and nobody has a crystal ball that allows them to see into the future, but I haven't seen any convincing arguments put forth to tell me that card values aren't about to collapse, barring some miracle cure coming around soon.  The only ones I've seen are those on Net54 watching current auction prices which don't seem to have been affected yet.  Which is interesting, but it only tells us where the hobby is at now, not where it is going to be at when the macro economic consequences of this crisis start hitting home in the next couple of months.

Anyway....oh shit, look at that.  This was supposed to be a post about my new bag of Calbee potato chips cards but it got sidetracked a bit there into a big discussion about the Coronavirus.  Anyway, returning to my bag of potato chip cards, I got these two 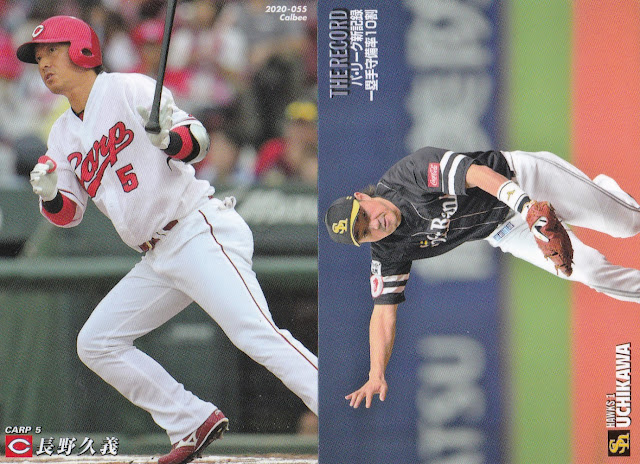 So basically the 2020 Calbee baseball cards look exactly the same as every set they've issued for the past twenty years, no surprises.  The card on the right is from a "The Record" subset and thus deviates from the stupid Calbee photography rules by giving us a picture of Seichi Uchikawa fielding rather than batting.  Looking at the regular card of Hisayoshi Chono on the left though it seems like the stupid rules are still in effect for them!

I might actually try to buy a few bags of these this year and return to the simple roots of collecting a set pack by pack.