The Bessho Head Hunting Incident on a Card 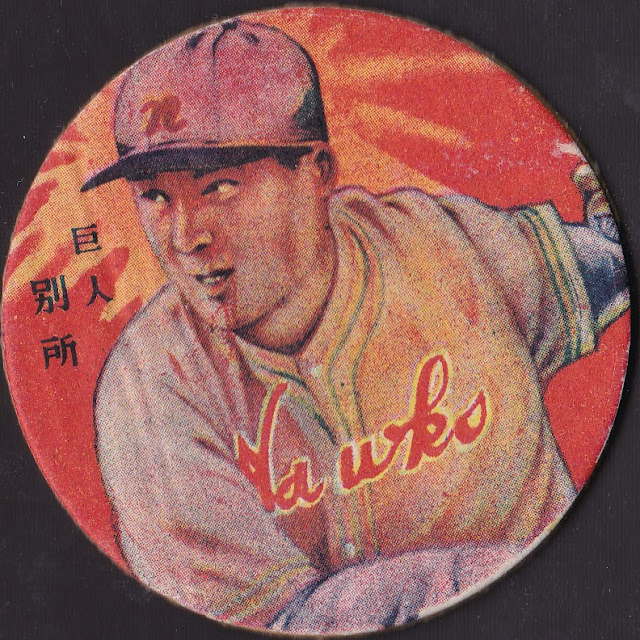 This is a card of Hall of Fame pitcher Takehiko Bessho.  It is from the 1949 Starburst set (JRM 2).

There is something really interesting going on in this card though.  Bessho is clearly wearing a Nankai Hawks uniform.  But the black text on the left side of the card identifies him as playing for Kyoujin, the nickname of the Yomiuri Giants.

Bessho had been the ace of the Nankai Hawks until the 1948 season, then moved to the Giants for 1949, where he remained for the rest of his career.  So this card was probably released sometime in early 1949 before they could get a picture of him in a Giants uniform.

But what is interesting about the card is that the manner in which he moved from the Hawks to the Giants created one of the game's biggest scandals in the immediate postwar years: The Bessho head hunting incident.

Bessho was one of the many Japanese star players who had always wanted to play for the Giants, but instead found himself playing for a much poorer team which didn't pay him much.  In 1948 he had gone 26-10 with a 2.06 ERA.  When he asked Nankai for a pay raise, the company said he hadn't been playing long enough to earn one.  When he suggested that he should be getting paid the same as Giants stars of similar stature he was told "Stop talking like an idiot, you think you can get special treatment?" (according to the Japanese Wikipedia entry).

Both Bessho and the Hawks appealed to the league (the Nihon Yakyu Renmei, which was reorganized into the modern NPB the following year).  During the appeal, a loan document between the Yomiuri Giants and Bessho was discovered, under which the Giants would lend him 100,000 Yen with a proviso stating "on your joining the Giants team...".  This occurred while Bessho was still under contract with the Hawks.

The league censured both Bessho and the Giants, fining the latter 100,000 Yen for tampering with a player from another team.  Bessho was suspended for two months.  It also gave the Hawks a 10 day period to negotiate a new contract with Bessho, after which Bessho would be free to negotiate with other teams.  The Hawks and Bessho never came to terms and he signed with the Giants.  The scandal is sometimes referred to as foreshadowing the events of the Suguru Egawa scandal 30 years later, which also involved Yomiuri shenanigans in poaching star players (which you can read about in Robert Whiting's You Gotta Have Wa).

There were two interesting postscripts to the scandal.  One was that Bessho actually changed his name as a result!  When he played with Nankai he used his birth name, Akira Bessho.  After moving to the Giants he began using the name he is remembered by today, Takehiko Bessho.

The second postscript came in the first Giants -Hawks series of the 1949 season, shortly following the scandal.  Bessho was under suspension and didn't play, but there was a lot of bad blood between the teams as a result.  In the third game of the series, held at the Giants homeground Korakuen Stadium on April 14, the Giants had a one run lead in the top of the 9th inning.  The Hawks had a runner on first with nobody out when Toshiaki Okamura hit a ground ball to the Giants first basemen Tetsuharu Kawakami, who threw the ball to second to get a force out.  The Hawks baserunner, Keizou Tsutsui, slid hard into the Giants second basemen Katsumi Shiraishi and prevented him from throwing back to first to complete the double play.

Shiraishi and Tsutsui got into an argument and the benches emptied.  Giants manager (and Hall of Famer) Osamu Mihara got into an argument with the umpire over whether there had been interference, which he lost.  As he was returning to the dugout he walked past Shiraishi and Tsutsui, who were still arguing.  Something Tsutsui said set him off and Mihara walked right up to him and punched him in the face.

Mihara was suspended indefinitely and wouldn't return to manage until July, serving 100 days in total.

Both of these incidents, the tampering with Bessho and Mihara's punch, are part of Japanese baseball lore to this day and sometimes get mentioned whenever the Hawks and Giants face each other in interleague play.  I was kind of surprised that I couldn't find much about either in English when putting this post together, so I'm happy to put it out there for the public record!

So like I said, this card has a lot going on - the struggle between the Hawks and Giants over Bessho is nowhere better represented than on a card which shows him as a player for both!
Posted by Sean at 6:32 PM