This is a complete set of 1949 JCM 111 menko baseball cards in uncut sheet form that I picked up a little while ago.

When I saw them in the auction listing I had this feeling that I had seen them before, but couldn't put my finger on it.  Then I realized the Betto and Oshita cards were featured on the cover of Sayonara Home Run, one of the few (only?) books out there about Japanese baseball cards. 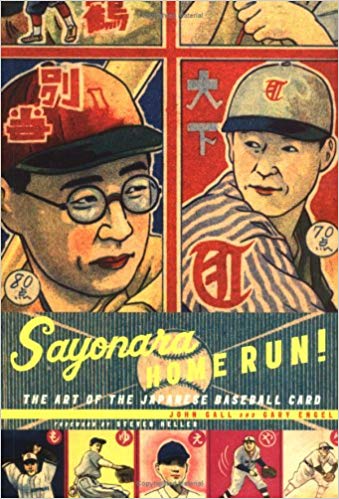 I don't have a copy of the book (not on sale in Japanese bookstores and I don't have an Amazon account) but the subject matter is of obvious interest to me.  Anybody out there read it and recommend it?

It must have been tough to chose cards to put on the cover since there are so many really cool menko out there which would have worked.  I can't disagree with their decision though, these cards check all the right boxes in terms of what make baseball menko look good: bold colors, cool design, etc.

The backs of these cards are pretty interesting too, they are basically the same as the fronts just without the color:

The set is also notable for its size.  Most rectangular menko from that era are about the same dimensions of American tobacco cards, but there are bigger.  They aren't quite as large as modern cards, but about halfway between the two.

The player selection ( Hiroshi Oshita, Kaoru Betto, Shigeru Sugishita, Tetsuharu Kawakami, Michio Nishizawa and Makoto Kozuru) is also pretty impressive, all six would end up in the Hall of Fame.
Posted by Sean at 7:09 PM