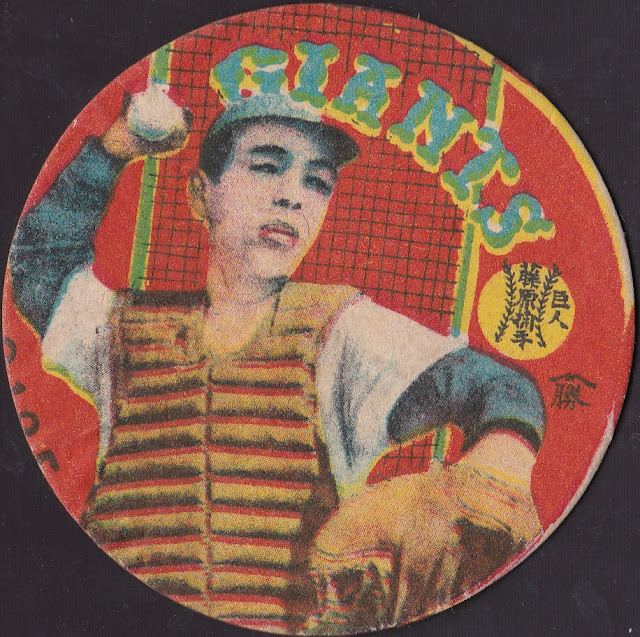 Yamakatsu is well known as the maker of some of the nicer (and odder) baseball card sets of the late 1970s, briefly rivalling Calbee as the main card maker in that stretch.  Prior to that though it also made a lot of really great menko sets over a lengthy period from the late 1940s to the early 1960s.

One of the earliest of these is the above, a round menko set issued in 1949 which Engel catalogues as JRM 51.  According to Engel the set has cards with three different sizes (small, medium and large I guess), I have the card of Giants catcher Tetsunosuki Fujiwara which is one of the medium sized ones.

I kind of like this set.  It seems every time I do a post about old menko cards I mention the bold colors being what I like about them. So its kind of trite, but once again I like the colors.  The team name in bold lettering also looks really cool.

You can tell it is a Yamakatsu card thanks to the logo printed on it:

This is a pretty cool logo, basically its the two kanji for "Yamakatsu".  The first kanji is Yama (山) which is one of the first kanji any Japanese student learns since its a pictogram.  It means "mountain" and it looks like a mountain.  Yamakatsu's logo makes it look even more so.  The second kanji is 勝 which means "victory".  They don't really do anything stylistic with that one, its an idiogram rather than a pictogram.  Anyway, Yamakatsu means "Mountain victory" which ....I have no idea where that comes from.  But its a cool name.

This particular set is one of the rarest Yamakatsu isses out there, Engel lists it at R4 (fewer than 10 copies of each card known) and this card of Fujiwara is the only one I have.
Posted by Sean at 5:41 PM