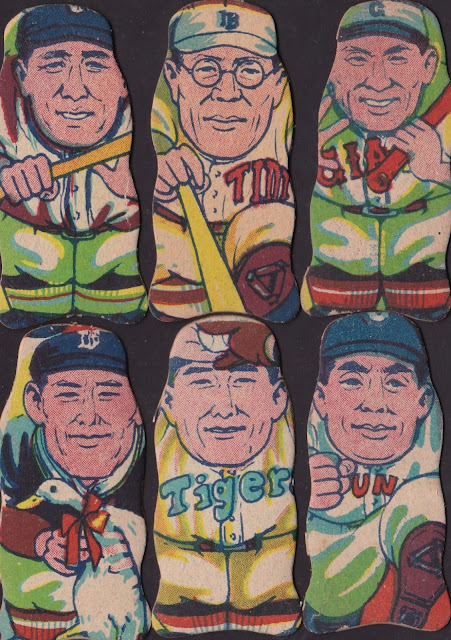 These are my cards from the 1947 set catalogued as JDM 11, one of the first post-war die cut sets produced.

If you are like me, when looking at the above photo your eye was probably drawn to the card on the lower left, which features Tokyuu pitcher Giichiro Shiraki.  And a duck.

What is that duck doing there?

Ducks don't belong on baseball cards, everybody knows that!

This duck has been bothering me for a while.  I've read up about Shiraki to see if I can find some amusing incident in his career that would explain the duck, but have come up empty.  He had a pretty short career, just 7 seasons, though he did lead the league in wins in 1946 and ERA the following season (though playing for a lousy team, he ended up with a losing career record of 97-98).  He is also notable for his post-playing career as a politician, becoming the first professional baseball player to be elected to the Diet in 1956 and serving until 1986.

But none of that would explain why he appeared on a baseball card in 1947 with a duck.

Google searches for his name and "duck" (in Japanese) don't turn up anything. His Japanese wikipedia page does tell us that team mates used to make fun of his big chin and repeat a very well known Japanese joke about long chins to him.

Well, I'll tell it to you anyway.  The Japanese word for chin is "ago".  So when someone has a long chin, people say to them in English "Long long ago"!  Ha!  Get it?

Yeah, I'm not a huge fan of Japanese humor either.

Anyway I'm not sure what to make of the duck.  Maybe its a pet?  Or it could have been a prize?  Food was very scarce in Japan in 1947 so giving a pro ball player a live duck to eat as a prize probably wasn't as strange back then as it would seem now.

To get back to the non-duck related elements of the set, this is what the backs of the cards look like. 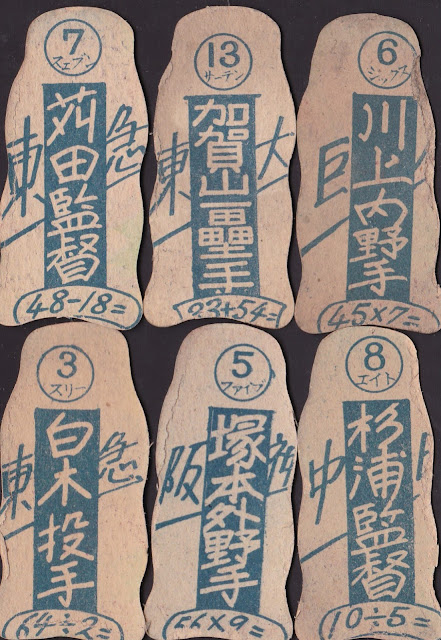 Card #6 is Hall of Famer Tetsuharu Kawakami and the biggest name in the set which I have, though I kind of like the Shiraki mystery duck card too.
Posted by Sean at 6:02 PM