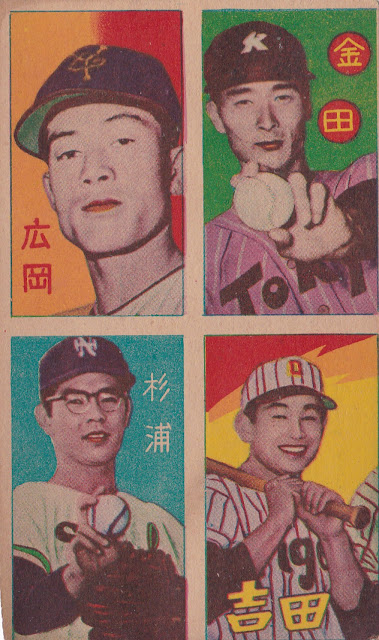 This is a block of four uncut cards from the 1960 JCM 162 set I picked up recently.  There are only 8 cards in the whole set so this sheet has half of them, and its got a pretty impressive player selection, all four of these guys are Hall of Famers!

On the top left you've got Tatsuro Hirooka, the 1954 Central League Rookie of the Year.  His playing career was not particularly impressive for a Hall of Famer, but after retiring he had a lot of success as the manager of the dominant Lions teams of the early 80s. Next to him you've got Masaichi Kaneda, Japan's only 400 game winner.  Bottom left you have Tadashi Sugiura who in 1959 had possibly the most statistically impressive single season in baseball history, going 38-4 with a 1.40 ERA.  And next to him you have Yoshio Yoshida,  a very popular short stop and 9 time Best Nine award winner for the Tigers. 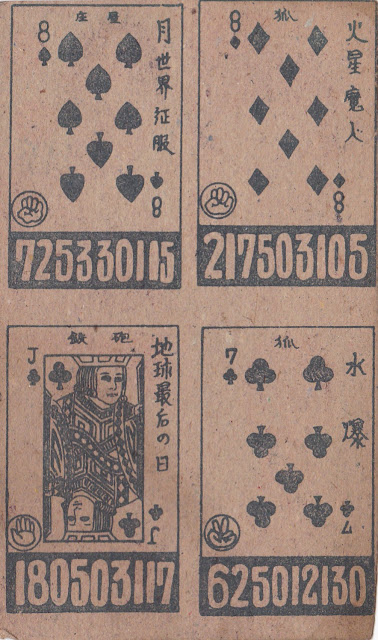 The backs of these cards are playing cards, which seem to be randomly assigned so the backs on mine aren't going to be the same as the backs on others with the same player.  Engel rates the set as R3, fewer than 100 copies of each card known, so its hard to find.  It wasn't really even on my radar until I found these and as usual the colorful backgrounds won me over!
Posted by Sean at 5:20 PM