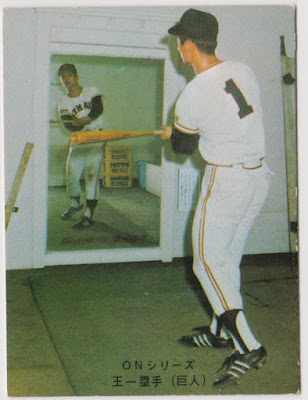 One of the more interesting cards from the 1974 Calbee set is this one (#405) which shows Sadaharu Oh practicing his swing before a game in front of a mirror.

According to the back of the card, when Oh switched to using his famous one legged batting stance on July 1, 1962, Shigeo Nagashima expressed doubt as to whether he could hit using it.  But it notes that Oh persevered and (of course) developed it well (it uses a metaphor about blooming flowers that sounds pretty hackneyed when translated into English so I'll just leave it at that).

Anyway, its one of those cool cards that shows an element of Oh's legendary attention to detail in his swing.