Sets that are frustrating to collect: 1977-79 Nippon Ham version 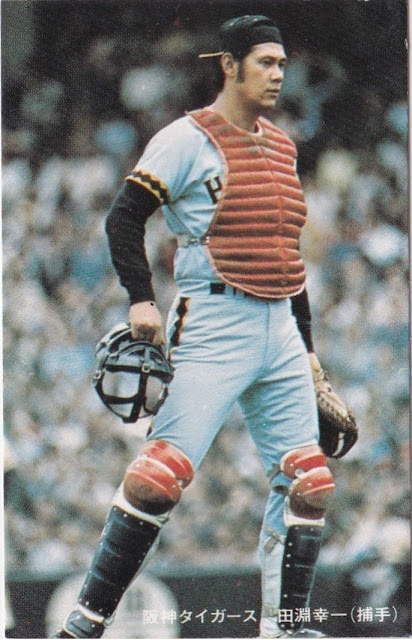 Nippon Ham released a couple of sets in the late 1970s.  Between 1975 and 1976 they issued one with a very distinctive border along the bottom.  I have about a dozen cards from that set (out of over 350).  Its a tough set to collect in part becaue of rarity but also demand: lots of Japanese collectors seem to be chasing it down too.

Their second set they issued between 1977 and 1979.  Unlike the first one it has a design that is almost identical to Calbee cards from the same era: full bleed photo with a bit of identifying text on the bottom.  The dimensions of the cards are a bit different from Calbee so they are easy to spot despite this similarity.  You can read a bit more about the differences between the two Nippon Ham sets in Dave's post about them here.

I picked up this Koichi Tabuchi card from the 77-79 set recently, its the only card I have from that set and likely will stay that way. 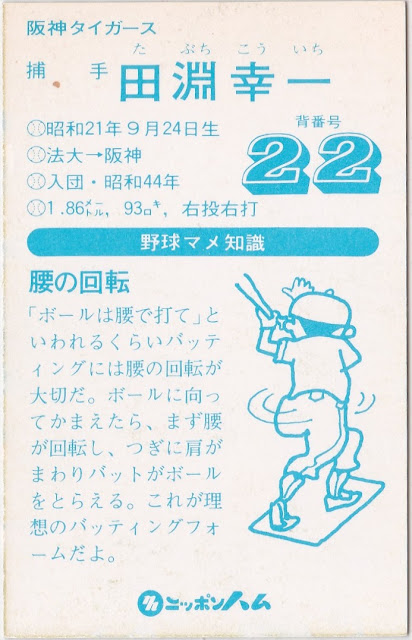 Even though I'm a set collector I just can't get myself excited about the prospect of trying to complete a 1977-79 Nippon Ham set.  Partly there is a bit (no, a lot) of frustration with the fact that the set is not numbered (the "22" on the back of my Tabuchi is his uniform number, not the card number), so its insanely hard to keep track of them.

Another daunting prospect is that the exact number of cards which exist remains unknown.  Engel has the most comprehensive checklist at 285 cards, but also acknowledges this may not be complete.  Its hard to commit to a task (like collecting a set) without a clear sense of how big the task is.

Finally there is the fact that these cards are so hard to find, and expensive when you do, but look basically the same as Calbee sets from the same era which are a bit easier to find and more affordable.  At any given time there are probably only a handful of singles from this set for sale on Yahoo Auctions and at high prices, so even starting a set is almost impossible (no starter lots or anything like that ever become available).  With the more distinctive looking 75-76 Nippon Ham set, which has the same problem, I'm more willing to overlook that fault since the set is so different.  With the 77-79 set though I just think "Calbee cards, but way harder to find and way more expensive, no thanks".

So my Tabuchi is basically a type card for my collection.  And its a nice type card, so I'm happy with it.

Any other set collectors have similar sets you won't tough due to the "frustration" factor?