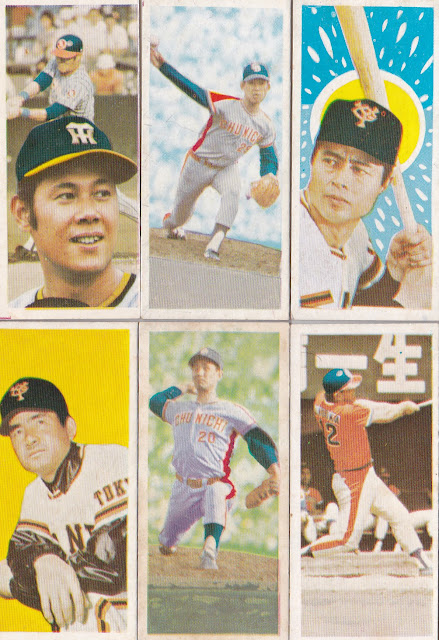 I am just two cards shy of completing the "Rocket Robots" set, which is undoubtedly one of the best named sets of baseball cards ever produced.

Engel seems to have named the set owing to the fact that the backs of most feature pictures of robots (or possibly aliens or Kamen Rider characters?) and the names of various types of rockets printed at the top (though not all, only 3 of the ones I have do, the others say things like "Captain", "M4 Tank" and "Red Cross", which is a bit eclectic). 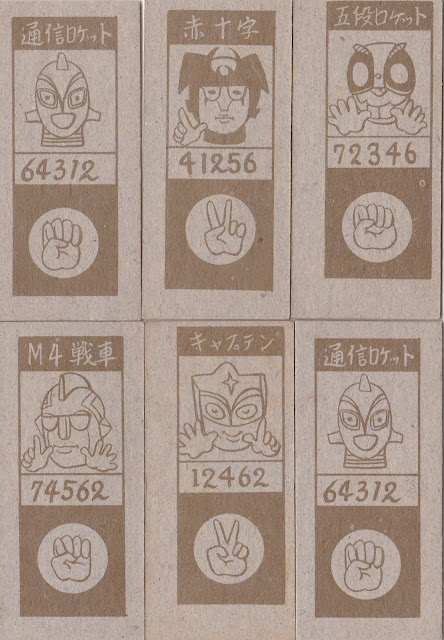 Interestingly 3 of the 8 cards feature members of the Chunichi Dragons (Senichi Hoshino, Morimichi Takagi and Takamasa Suzuki), which sort of continues an odd theme of the Dragons being over-represented in menko sets of the mid to late 70s (contrasted with the Giants being way over represented in the conventional card sets like Calbee of the same era).

The Sadaharu Oh card from this set is one of his most striking (and that is saying something, he is on a LOT of cards from the 70s).  The background artwork makes it look like he has a halo.  Saint Oh, guardian angel of the long ball or something like that.  The others are a bit more subdued but still cool.  Koichi Tabuchi shares his card with Isao Harimoto in the background.

Its kind of a neat set and one thing I love about 8 card sets is that you can fit them almost perfectly into a single binder page (a 9 card set would, of course, fit absolutely perfectly but they are a bit harder to come by).  So I've got two pockets waiting for the two I need (Takagi and a Koji Yamamoto/Sadaharu Oh combo card)!