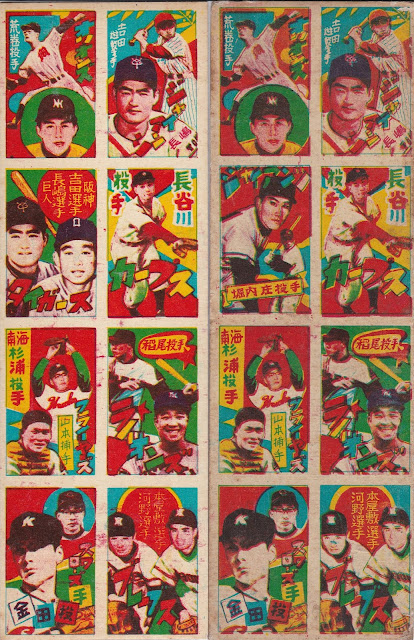 A few months ago I picked up two uncut sheets from the 1958 Mitsuwa Menko set (JCM 129) which had eight cards each.  There was some duplication on the sheets and I was kind of curious about how the cards were distributed on the sheets.  Its a 16 card set, but thanks to the duplication my sheets only gave me 13 out of the 16.

Can you spot the difference?

The Nagashima/Yoshida card on the left sheet has been replaced with a card of Atsushi Horiuchi on the right sheet.  The other seven cards though are the same and all in the same position.  Weird, huh?

Another oddity is that despite the differing fronts, the backs on each sheet are identical: 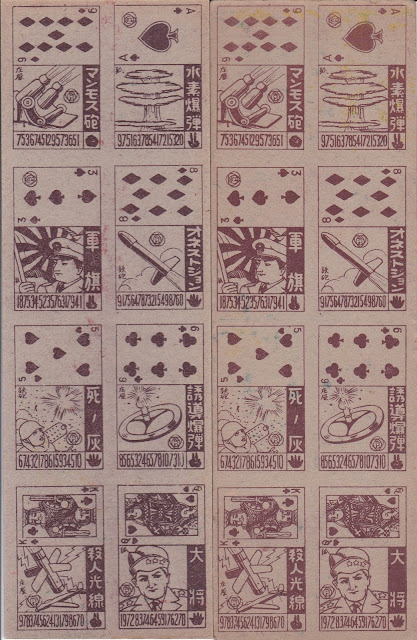 So there you go.  I'm very curious as to how many variations of these sheets there are out there and I'm going to keep on picking them up whenever I see them.  Unfortunately that is not an easy task, the three I have are the only three I've ever seen and Engel ranks the set as R2 on his rarity scale, so they are pretty hard to come by (especially in uncut form). My curiosity is piqued though so I'm going to keep at it.
Posted by Sean at 5:26 PM