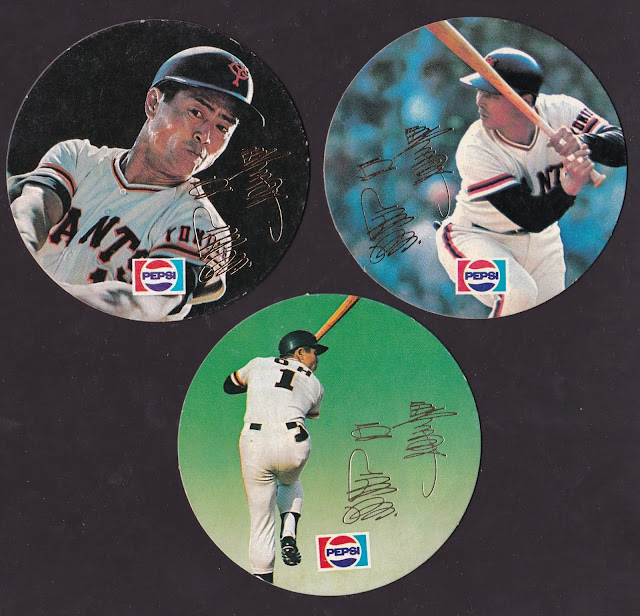 I've been focusing a bit on my 1970s Pepsi collection recently.

In 1977 Pepsi released a couple of round menko sets (JRM 31 and JRM 40, very similar except one is larger than the other).  As with their previous sets these mainly featured players from the Chunichi Dragons, but unlike those sets Pepsi also landed Sadaharu Oh who is shown on 3 cards in each set.  My recent random pick ups include his three cards from the JRM 40 set.

These are some of the coolest Oh cards out there, the images on each of them are really well chosen and composed.  Each features a gold embossed signature and the 1970s Pepsi logo which looks pretty cool  The backs seem to have been printed in three colors judging from the three I have: 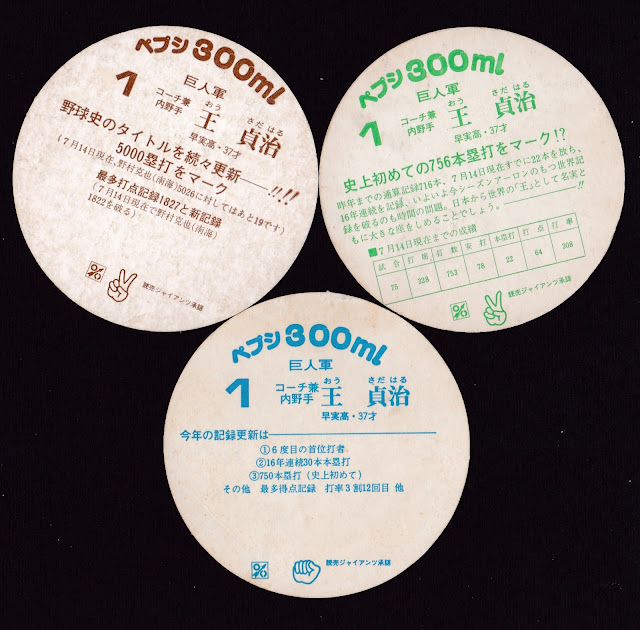 As the top of each indicates, these were in some way connected specifically with 300ml bottles of Pepsi, but otherwise I'm not sure how they were distributed.  Engel rates them R3 (less than 100 copies known to exist) which seems about right, they are pretty scarce, and makes me wonder if that is a result of them having been distributed in a really limited area or simply because everyone threw them out long ago.

An interesting thing to note is that these cards seem to have been issued at slightly different times during the 1977 season.  The one with the green back asks "Will he be the first to hit 756 home runs?" and then notes that as of July 14th he had 22 home runs (which would have given him 738 for his career at that point, he came into the season with 716).

But then the blue back one notes that this year he had been the first person to hit 750 home runs (presumably in NPB).  So it must have been released after the green backed one, but probably before the end of the season since he broke Aaron's record in September of that year and it would have been odd to not mention that.  Maybe it came out in August, after he hit #750 but before he hit #756?

Anyway, these are some of the cooler cards released in the year Oh broke the record.  They would release some more in the following couple of years as Oh extended his record.  I've picked up some of those recently too and will be doing a post on them in the near future.
Posted by Sean at 5:17 PM