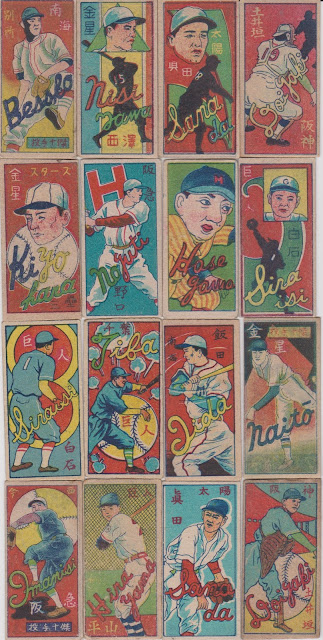 I'm in love with these.

I picked up the above lot of extremely colorful and just all around wonderful menko a little while back off of Yahoo Auctions.  There are sixteen cards which seem to come from 6 different sets (based on the different back designs, some have very similar designs on the front).

I've only been able to identify three of the sets they come from in Engel - JCM 1, JCM 100 and JCM 48.  All of those were issued in 1948 and judging from the similar designs I think the others were too.

I just love the artwork on them, when you put them in a binder page or lay them out together like in the scan at the top of this post they just scream for your attention in a way that few other baseball cards are capable of.

I got a few cool players of note in the lot.  Some highlights include

Juzo Sanada, a Hall of Fame pitcher for Taiyo (a predecessor of today's Baystars).  He has an odd claim to fame stemming from his 1950 season.  He set a lot of "bad" pitching records that year - giving up the most runs (202), most earned runs (163) and most hits (422) of any pitcher in history.  Yet he won the very "first" Central League Eiji Sawamura award that year, winning an astounding 39 games despite a somewhat high 3.05 ERA.

His claim to being the first Central League Eiji Sawamura award is complicated by the fact that the award had been given out to other pitchers in the previous 3 seasons.  But during those seasons it was given to the top pitcher in all of NPB.  From 1950 until 1989 it was only given to the top pitcher in the Central League, hence his being the "first" to win the Central League exclusive version of the award.  Takehiko Bessho pitching for the Pacific League Nankai Hawks had won the real first award in 1947 and it wasn't until Hideo Nomo won it in 1990 that another Pacific League pitcher was so honored.

Shigeru Chiba is another Hall of Famer, a popular second baseman for the Giants in the 40s and 50s. His career counting statistics don't scream Hall of Famer, though he was selected to the Best Nine 7 times, a record for second basemen (later matched by Morimichi Takagi) and he has some odd records like having hit 39 home runs in a row between 1950 and 1954 that all went to right field.

He wasn't a power hitter (96 career home runs), but I do like the way this card makes him look like a real slugger with the explosive clouds emanating from where he connected with the ball!

He is also known for having batted alongside Wally Yonamine in the Giants lineup and being one of the American's best friends who helped him adjust to life in NPB.

Takeshi Doigaki isn't a Hall of Famer, but he was a very popular catcher for the Hanshin Tigers in the 1940s and 1950s and appears in a lot of sets from this era.  He was a perennial Best Nine winner during the late 40s and early 50s.  I love the look of this card.

Anyway, just a few "stuff I recently got" highlights!