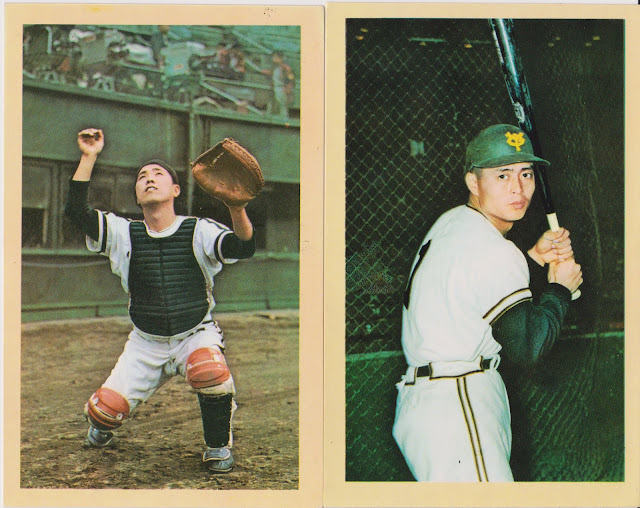 I finally got me some 1964 Morinagas!

If you live in Japan today you might know Morinaga mainly as the food maker responsible for making powdered milk for coffee which for some reason they called "Creap".  I have a jar of it right next to me as I type this in fact: 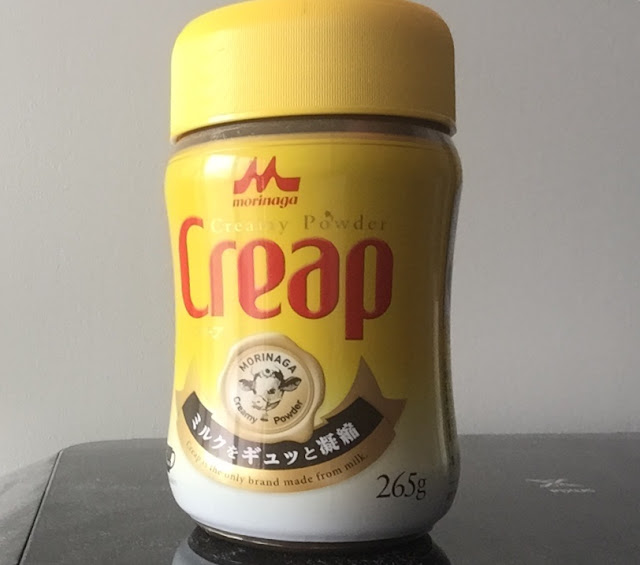 They issued two sets that year: "Top Star" and "Color Stand" (called "Standups" in Engel).  On the front they are basically the same, a color photo with a glossy finish and white border on a postcard sized card.  The backs differ quite a bit though.  The "Top Star" cards have a pretty simple back which gives some biographical information about the player depicted: 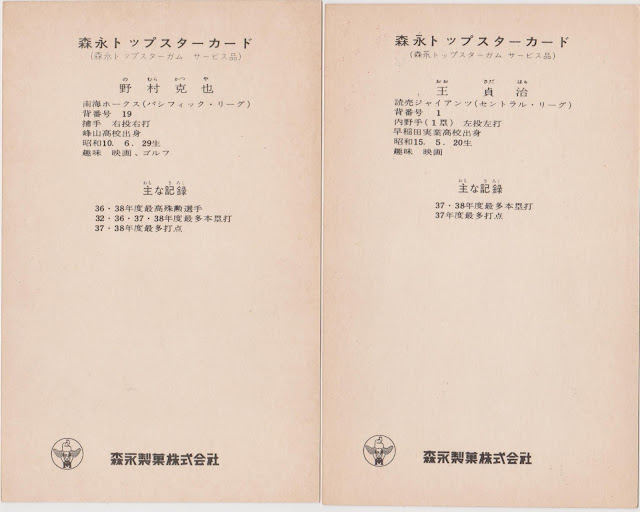 The "Color Stand" cards on the other hand have punch out tabs on them that allow you to fold them out into a little display stand, which is great.  It reminds me a bit of the 1988 Donruss All Star punch out stand ups I used to collect like 30 years ago. 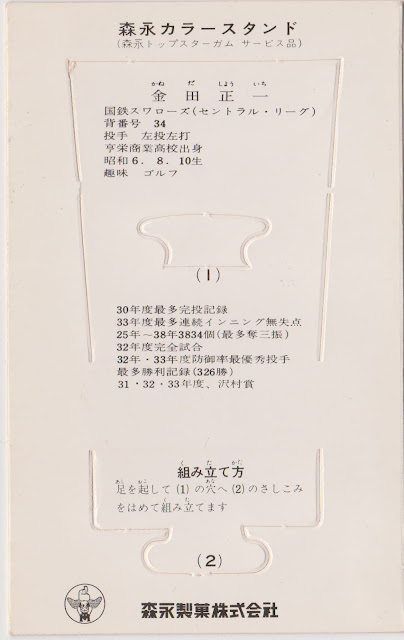 I picked up a lot of three of these on Yahoo Auctions a few days ago, two Top Stars and one Color Stand.  All three were pretty big names - Sadaharu Oh and Katsuya Nomura were my Top Stars (pictured at the top of this post) and Masaichi Kaneda was my Color Stand: 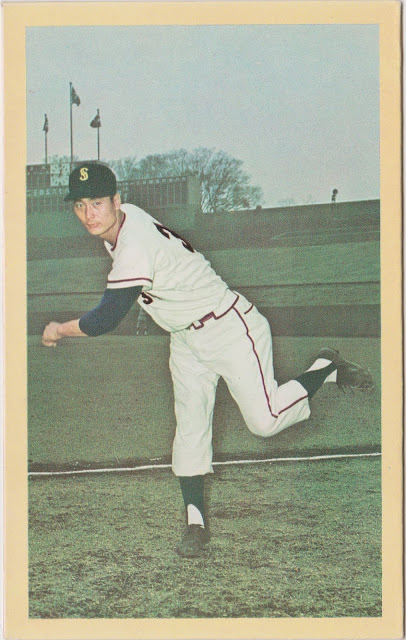 The three are in great shape and I'm really psyched to finally have some cards from those sets.  The Kaneda card I discovered might be an uncorrected error card.  If you look closely it spells his first name as "Shouichi" on the back instead of "Masaichi".  Both are correct readings for the kanji he uses for his name and its not uncommon for people to make mistakes like that, perhaps the guy editing it just didn't know the correct reading of his name (Japanese is hard because of stuff like this BTW).

Perhaps as interesting as the cards themselves are who I bought them from.  Larry Fuhrmann is kind of a legend among Japanese baseball card collectors since he is one of the most important pioneers in the modern hobby, he even played an important role in the creation of the first BBM set back in 1991.  You can read all about his history on Dave's excellent post here which I highly recommend.  I kind of like the fact that he got his start in Japan as an English teacher in Kobe since that is exactly how I got my start too, only I arrived in Kobe in December of 1999 (hit my twentieth anniversary just 3 days ago!) quite a bit later than him.

Anyway, he is still in the hobby and runs a great business on Yahoo Auctions as dealer_Larry and I've bought a few things off him before, he is a good source for vintage stuff and I totally recommend keeping him on your watch list as he puts up some really interesting stuff sometimes.  I think he also sells on Ebay too, though I'm not really an Ebay guy anymore so I haven't checked!

Also, and this is something only people who collect cards via Yahoo Auctions Japan can appreciate - the cards arrived all stored in top holders which no Japanese dealer ever does no matter how expensive the cards.  Every other card I've purchased on Yahoo auctions (and there are a lot by now) has come sandwiched between two pieces of cardboard taped together, which is obviously cheaper for the seller but very annoying for the buyer since they never put any thought into the question of whether it will be easy for the buyer to extract the card from the wad of cardboard and tape they encase it in (its never easy to get them out!).