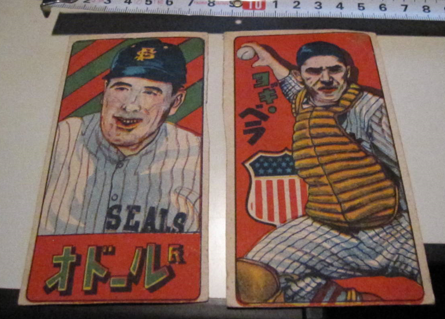 I got kind of excited a couple weeks ago when I stumbled onto an auction for the above two menko, one featuring Lefty O'Doul and the other Yogi Berra.

I looked these up in Engel and they appear to come from the set he catalogues as JCM 126 which commemorated the 1951 US All Star tour of Japan.  The set is extremely rare (they rate it as R5, fewer than 5 copies of each card known) and features Joe Dimaggio.

But here is the thing, Engel doesn't list Yogi Berra or Lefty O'Doul in the set.  So I had this neat "Holy crap, this is a newly discovered card of a big name Hall of Famer" moment.  In fact, this might be the only copy of this Yogi Berra card known to exist! And its kind of a cool looking one too! 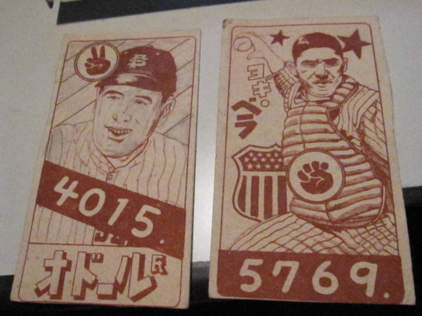 I put in some bids that were much higher than what I usually do but ended up losing it, I guess I wasn't the only one out there who had the same reaction!

I was plagued with doubts about whether I should have bid higher, did I let a once in a lifetime opportunity slip by?

Then a weird thing happened.  The same seller listed  copies of the same two cards again! 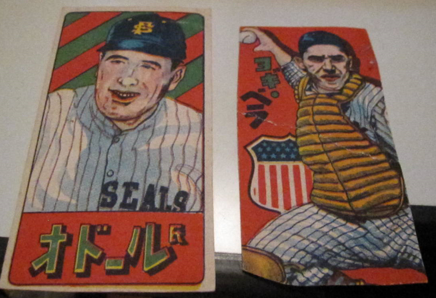 This made me feel a lot less bad about missing out on the first auction, since I now know for a fact that it wasn't the only copy of that Berra (and O'Doul, who was no slouch either) in existence.  I've decided not to bid on this second one mainly because the Berra is in such poor shape (I guess it goes without saying that if I was bidding on it I would have waited until after the auction ended to post about this, hope nobody gets mad at me for "outing" it).

Anyway, at the very least I can say that there are two additions to the JCM 126 set, both pretty big names!