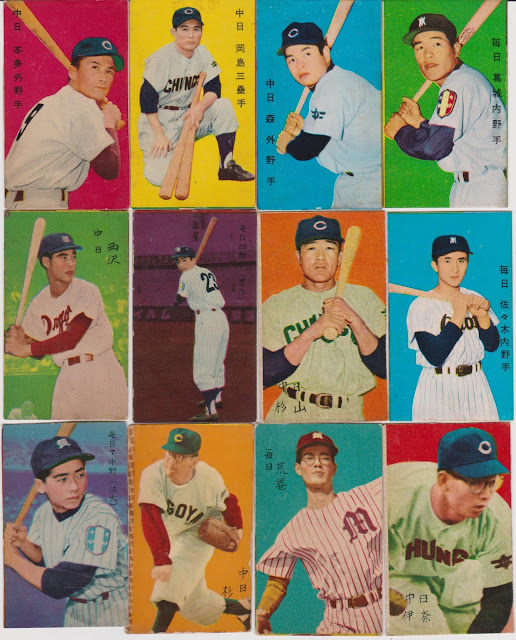 Colors!  Like a rainbow only not in the correct order.

Baseball menko from the tobacco era (roughly 1957 to 1964) generally came in two styles: with border or without.  I kind of prefer the ones without border and this collage of a dozen that I recently picked up (part of the same lot that turned up my black and white Kaoru Betto find) demonstrates why.  These just look so awesome when you put them together, an effect that would be dampened if they had little white borders separating the bold colors each has as a backdrop.

Though they look largely the same on the front, they have different backs and the lot contains cards from five different sets: 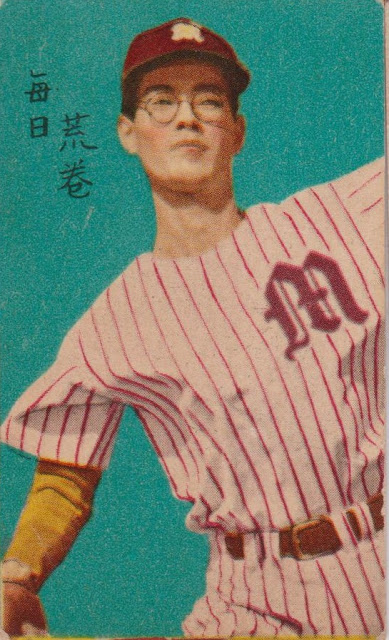 There are a few hall of famers in here.  Atsushi Aramaki  had a Hall of Fame career mostly with the Mainichi Orions.  In his rookie season in 1950 he led the league in both wins (26) and ERA (2.06) and took home the Rookie of the Year award.  Oddly he never led the league in any major category again in his 12 year career, but he was consistently good over the period from 1950 to 1959, finishing his career with a 173-107 record and a miniscule 2.23 career ERA.

Now that I have these cards, in addition to a few others from the same sets I had from before, I think I'll get to work on some actual set-building with them.  Unfortunately they are pretty hard to come by.