Collecting Cards in Japanese: A Guide to the Language 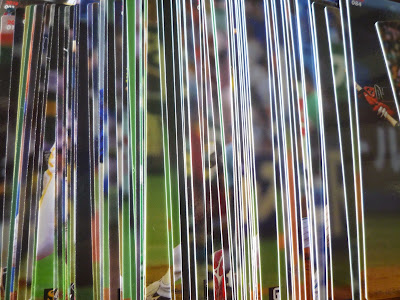 During my visit to Mint Ponyland with Dave last week I noticed there was a bit of an odd language gap between Dave and the owner.  It isn't odd that they spoke different languages of course, but rather that the card collecting nomenclature in English and Japanese don't match up, despite the fact that much of the Japanese is based on English loan words.

Dave wanted to know if they sold complete sets of a certain BBM set and he used the term "complete set" in English, which the storeowner didn't understand.  I then jumped in and asked in Japanese if he had it "furu conpu" and he immediately comprehended.

The weird thing is that the words "complete" and "set" are known to Japanese collectors and used in Japan, but not in the same way they are in English (and not together like that as one phrase), hence the confusion.

The phrase I used - furu conpu - is the Japanese term for "complete set" and its actually English - furu is the closest the Japanese language comes to replicating "full" and "conpu" is an abbreviated form of "complete" - so I was saying "full complete".

Its very hard to understand the way in which the Japanese vocabulary around card collecting has developed.  The English phrase "full complete"  is understandable, but its not a phrase any North American card collector would use to describe a complete set (the two words together create a redundancy that would annoy us - if it is "full" it is by definition "complete" and vice versa).  How the Japanese collecting world decided to put these two together is a bit of a mystery to me!

Anyway, in this post I thought it might be useful to create a little vocabulary guide for any English speakers out there wanting to know how to use the jargon of card collecting in Japanese correctly.  I've set out some of the terms that get used a lot below, organized into three categories based on their relationship to English: 1) words that are borrowed directly from English and have the same meaning, 2) words that are borrowed from English but have a different meaning in Japanese, and 3) purely Japanese words (or mixed Japanese-English words).

1) Words or phrases that are borrowed from English (just the pronunciation is different) and have the same meaning in both.

セミコンプ (Semi conpu) = Near complete set.  Based on the English words "Semi Complete".


おまけカード (Omake Ka-do): Basically means a bonus card of some sort.  Can be used to describe either something a seller is throwing in for free in a deal (as in "I'll toss this in as a bonus") or something that was originally distributed as a bonus (Calbee cards are sometimes described like this since they were a "bonus" given away with bags of chips).


直筆サインカード (Jikihitsu sain Ka-do): autographed card (not a facsimile but a real autograph).  Putting the Japanese word "Jikihitsu", which means "directly written" in front of "sain ka-do" distinguishes it as a real autograph.


未開封 (Mikaifu): Unopened (as in "unopened pack" or "unopened box").


美品 (bihin): Mint condition (literally "beautiful product").  This doesn't convey the same exactness as "mint" does in English since the hobby here isn't as nitpicky about condition, and is maybe more accurately translated as "high grade", cards that could be about EXMT or better would probably be described this way.


地方限定版  (Chiho Genteiban): Regional limited edition.  This term describes the rare Calbee series that were distributed only in certain regions.
第3弾 (Dai san dan): Third Series (second series, etc).  Even though "Series" is used as a loan word directly from English, they use this phase to describe a specifically numbered series.

This is by no means an exhaustive list, its more or less what I thought of off the top of my head while composing this post.  I'll try to add to it as I think of more (and maybe if anyone has some suggestions please post them in the comments)!