Extreme Collecting: How do you Distinguish Your Collection?


Today's collecting hobby is pretty extreme.  I don’t mean “extreme” in a bad way, but more in the way it is used in phrases like “extreme sports” – collectors are just doing amazing things with their collections that would have been almost impossible back in the late 80s/early 90s when I was a young collector. A side effect of this has been a significant raising of the bar for what the hobby considers to be an “impressive collection”.


There are two analogies that are useful in understanding this.  The first is this side by side montage of Olympic gymnasts performing in the 1950s compared to what they are doing today.  Its pretty insane how simple the stuff from the 50s looks today. The cumulative effects of advances in technology, training methods and medicine have made this change possible.

Another somewhat different process is illustrated by a comparison of a picture of Mount Everest in 1953 when Edmund Hillary and Tenzing Norgay were the first to successfully climb it: 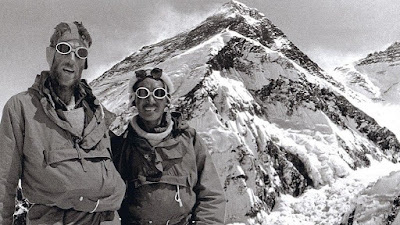 And today, when you’ve literally got hundreds of people cued up waiting to reach the top as if they were waiting for Wal Mart to open on Black Friday: 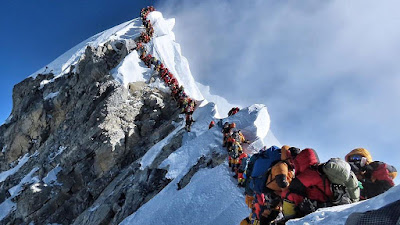 Like the Olympic gymnasts this change has also been made possible by technological, training and medical advancements.  But it also illustrates a change that comes about when someone does something that nobody had ever done before: it motivates others to follow in their footsteps because they now know it is possible.


You can see some obvious parallels in these comparisons across time with a look at baseball card collecting today and back in the 1980s.  I’m mainly thinking about vintage collecting here, but the same applies to contemporary stuff.  I remember back in the 1980s thinking that collecting a complete set from the 60s or 70s would have been mind blowingly difficult.  And it would have been.  Even if I had an unlimited budget (and I didn’t), finding the cards would have taken years of work – going from card shop to card shop, card show to card show, hoping that dealers had what I wanted.


Then technology came along in the late 90s and Ebay meant that you had dozens or even hundreds of every card from the 60s and 70s available and suddenly collecting sets from the 1960s and 70s (and earlier) didn’t seem impossible anymore, it was something way more collectors could do.  In addition to the time factor, the price of those cards also came down a bit, reflecting the increase in supply that everyone had access to (even though the actual supply was the same as always). The sudden ease of amassing vintage cards meant that the standards for what might be considered an “impressive” collection also went up.  Back in the late 80s/early 90s I remember furtively trying to put together a 1968 Topps set.  In four years of work (with a very limited budget) I was able to accumulate a pile of about 50 mid-grade commons with a smattering of lower level Hall of Famers (Joe Morgan, Juan Maurichal and a couple other guys).  I worked so hard on finding those and all my collecting friends thought it was such a cool project.  Today though it would basically be one out of dozens of lots that go up on Ebay and fetch maybe 20-30$ on a good day.  Its nothing.


The increased standards have led a lot of collectors to projects that either didn’t exist or wouldn’t have been thought possible back in the 1980s, much like the Olympic gymnastic moves of today or the idea of an inexperienced hiker scaling Everest would have been unthinkable in the 1950s.  Part of this is obviously done out of interest, but I think partly there is also a strong competitive element to it: a lot of collectors want their collection to be deemed “impressive” to their fellow hobbyists in some way.  And the internet has had two big effects in this regard.  Its not just that Ebay has made collecting easier, its that the proliferation of information on blogs like this or forums about collecting have made collectors way more aware of what people are collecting and how they are collecting it, which probably provides some fuel to the “keeping up with the Jones’s” competitive element to it.  In the old days you only had to make your collection impressive by the standards of your immediate collecting friends who probably lived in the same town as you and faced all the same collecting constraints you did (since you were all limited by what the local dealer had).  Now your basis of comparison is everyone on the internet, which includes people with insane amounts of time and money on their hands to devote to this hobby.  It’s a fool’s errand to try to compare yourself to that, but at the same time its also hard to ignore, at least for collectors who want to make their collection unique.


I think there are three forms of extreme collecting by collectors pushing the boundaries of what constitutes an “impressive” collection which can be summarized here in turn.


This is really the old fashioned way of doing it and the practice is alive and well.  Probably the PSA registry of regular sets is the main exemplar of this trend.  Want your collection to be famous?  Throw a ton of money at PSA 9s and 10s of cards from a given set and you can have your name acknowledged as the owner of the BEST set of 1979 Topps card in the world.  Its basically the same as collecting a 1979 Topps set used to be, only it costs 50 times as much.


If you don’t have the kind of cash necessary to buy your way into fame, there are still some interesting ways of working your ass off to create something impressive.  My favorite example of these are guys who are working on getting every card from a given set autographed. Like I was surprised to learn that there are a lot of peopleworking on completing the 1987 Topps set with all the cards autographed.  Most of those guys are doing it the old fashioned way, mailing letters to players, tracking them down at card shows or wherever they happen to be, and only resorting to buying autographed cards when its unavoidable (such as with players who are already deceased).   That takes a lot of time and effort and is a genuinely impressive feat.  But it kind of reminds me of Mount Everest.  Somebody had to have been the first to complete a 1987 Topps autographed set (and that is just one of many out there) and when they did they probably thought that was an unmatchable feat.  But having shown that it was possible, there are now a huge gaggle of other collectors working on it, exchanging tips on how to get certain guys to sign and so on.  So its still impressive, but more like scaling Mount Everest in 2019 than doing it in 1953.


Personally, I have way more respect for collections put together this way than I do for PSA registry sets, which have a way stronger whiff of “rich person vanity project” to them. Autographed sets put together one by one have more of a “labor of love” feel that I find more compelling.


A third way of creating an impressive collection is to find some inventive way of distinguishing it from others, or collecting something that nobody else has collected before.  This might require both wads of cash and feats of endurance, but they aren’t its distinguishing feature and it might not require either (collecting a card of every player whose middle name was "Ned" for example).    There is a guy on Net54, Nick, who is putting together a collection of one career contemporary card of every member of theJapanese hall of fame (save for a few like Eiji Sawamura for whom no such card exists).  That is a pretty original thing to collect and I’m pretty sure nobody has ever done that before (at least nobody outside of Japan) so he’s got a unique and interesting collection on the go which counts as impressive.  Seeking out projects like that which are truly unique is of course going to get harder and harder as more and more people “discover” and achieve more and more of them, but its cool to think that there are still more out there.


Where My Collection Fits


Collecting cards in Japan I'm well aware that I am considered a "niche" collector within the wider hobby (at least in the US, which as an English speaker is my online peer group).  I'm definitely not throwing wads of cash at it, or at least wads big enough to make it distinguishable on that basis.  But I think mine has elements of types 2 and 3 above in it.  Collecting vintage Calbee sets like I am is a pretty intense feat of endurance.  I had to move to Japan, learn the language and live here for almost twenty years to get to where I've gotten on those Calbee projects.  OK admittedly I didn't do that stuff for the purpose of putting Calbee sets together, but its pretty hard to do those sets without doing something like that since having access to the cards in sufficient quantities to complete a vintage set necessitates a physical presence in Japan and an ability to work in the language (or having someone there for you, I do act as a proxy for some American collectors looking for older Calbees).

Also, those sets are hard.  Like REAL hard. Engel in the guide notes that very few complete Calbee sets from the 70s and 80s exist out there and from personal experience I can say that putting them together even if you move to Japan and learn the language is going to take years.  Its a feat of endurance.  Its also somewhat original though, in the sense that I don't think any foreigner (at least that I know of) has ever put together entire sets of 70s/80s Calbees out there. Certainly I've known some who have tried (or are trying right now at the same time I am) but I don't know of any who have succeeded in putting one all the way together.  I'm 4 cards away from finishing my 1987 Calbee set for example and I'm wondering if I'm going to be the first foreigner to ever put that thing together. With the 1975-76-77 set I'm way more confident that I will be if I ever finish it since I doubt that more than 10 people in Japan have ever done that monster.

Do any of you have extreme (or regular) collections that you try to distinguish in some way?