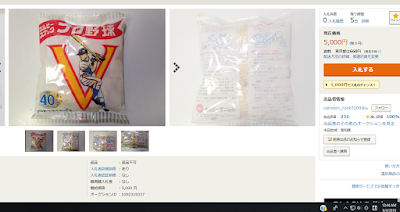 There is a kind of neat thing available for auction right now: an unopened bag of Calbee baseball snacks from 1977. I've seen the empty wrappers for sale before, but never an actual full bag of chips still intact.

Its kind of weird, the chips actually still look like chips, they haven't decomposed or anything in there (vacuum sealed!).  Well, actually they technically don't look like "chips" since they are actually "snacks" - look closely and you'll see that they are some sort of snack with a bunch of holes in them, not the standard potato chips they sell today.  Still though, they look about as new as they probably did in 1977.

The seller has it listed with a 5,000 Yen starting bid.  I have no idea if it is worth that but I guess it certainly could be.  I'm not sure if its something I would ever want in my collection though.  It seems like the sort of thing a die hard Calbee collector like me should want, but I have no idea what I would do with it if I bought it. It'd be a neat display piece for anyone with a vintage Japanese baseball themed man cave, but I live in a tiny Japanese house that doesn't have room for man caves.   So I think I'll let it go, interesting though it is.

Email ThisBlogThis!Share to TwitterShare to FacebookShare to Pinterest
Labels: 1977 Calbee