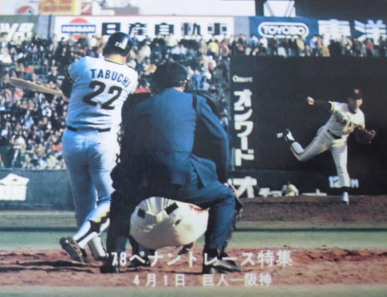 I picked up another card I had been hunting for a while last week.  Its not one I need for a set I'm working on, but rather one that I have wanted because it just looks so damn good.

Its from the 1978 Calbee set, the Pennant Race series, and features Koichi Tabuchi taking a big swing against a Giants pitcher.  I ran across it in Yahoo Auction a few months ago and ended up losing that one.  But I couldn't get it out of my mind, its such an amazing photo - there is so much going on in it. You get the back of the umpire dead center in the image, which is odd but somehow works as he adds to the action between Tabuchi's swing and the pitcher coming off his throw.  The billboard in the stands and the mass of spectators is the perfect backdrop.  Its one of those cards that define everything I love about 1970s Calbee cards.

Unfortunately the 1978s are kind of hard to find and it took a few months for another one to show up at auction.  I put a higher bid in this time and won it for 2100 Yen, which is a bit on the high side for me (especially for a card that isn't in a set I'm working on) but it was so worth it.

I now have to decide if this displaces my previous "most beautiful 1970s Calbee card" at the top of the list: this Oh/Nagashima card from the 1974 set: 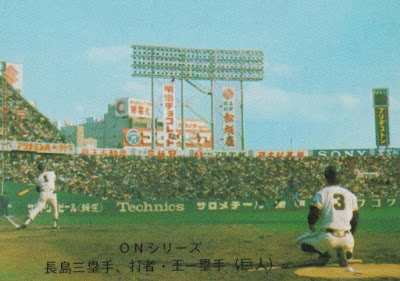 I can't really make up my mind on this one.  They are both so good....