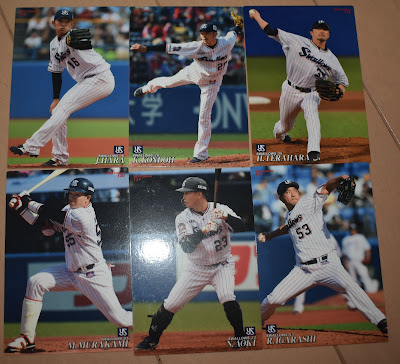 I just realized that it is already July and I am only just now getting around to doing a post about this year's Calbee set.  I'm so late Series 2 is already out, so I'll skip the first one and do a post about the second, which I just bought in complete form off of Yahoo Auctions.

Since last year I've decided that my way of evaluating new Calbee sets is based on photography, since the base design only seems to vary slightly from year to year now (between using Roman letters and Kanji for player names).  As I noted last year Calbee sets have become dreadfully predictable in their use of photography, to the extent that it is all based on three rules.  1) position players except for catchers are only shown batting, 2) pitchers are only shown pitching and 3) catchers are the only ones who sometimes are shown fielding at their position.  So my way of evaluating a new Calbee set is based entirely on how much they were willing to "wow" me by deviating from these three rules.

This year, unfortunately, the boring photography trend has continued.  70 out of the 72 cards in the base set (such as the entire Swallows team, pictured above) conform to the rules.  Individually none of the photos are bad, but collectively the repetitive site of everyone doing more or less the same thing gets very monotonous.

Its not just the poses that are boring, but also the framing - the players are always cropped so that they take up all the card.  Again its not a bad thing individually, but sometimes its nice to see a bit of variety (like a picture of a player with an impressive backdrop taking up a bit more or the card, see the Nagashima and Oh card at the head of this blog).

The monotony in framing leads to odd things, like the fact that every card of the Chiba Lotte Marines has the same infield dirt taking up the exact same amount of the bottom of the card - it almost looks like a colorful border but no, its just the result of near identical photo framing. 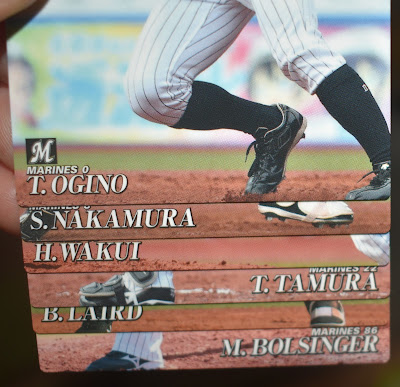 These are the only two cards that deviate from the batters batting/pitchers pitching/ catchers catching photo selection: one guy running the bases, the other fielding.  Neither are particularly exciting and suffer the same identical framing problem, but at least they are a bit different.  But I mean come on, just 2 cards out of 72? 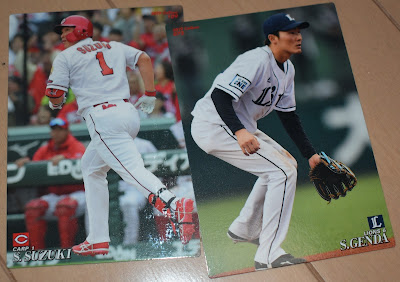 In addition to the regular 72 card set I also got the 12 card opening day pitchers subset (boring!  Same photo problems as the regular set), and the 4 card checklist set which has the only interesting pictures in the entire thing: 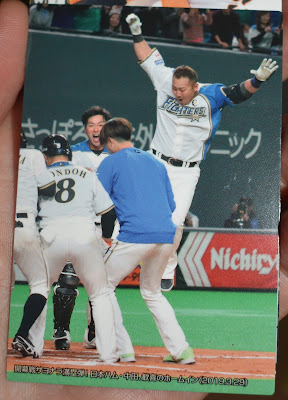 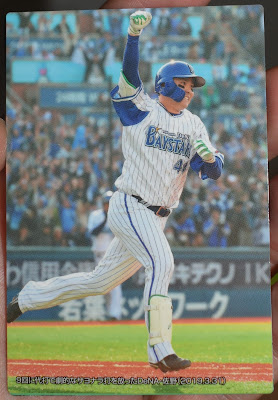 See?   This is what I want Calbee cards to look like! Both of these cards show guys doing exciting things other than batting/pitching and both of them are framed to allow some background to be visible in the picture.  Wouldn't it be nice if Calbee made the entire 72 card set like this instead of just the 4 card checklists!  I mean, they used to do that back in the 70s for crying out loud, why not now???

Email ThisBlogThis!Share to TwitterShare to FacebookShare to Pinterest
Labels: 2019 Calbee