Over the past few weeks there have been some really interesting listings on Yahoo Auctions for Calbee cards that I didn't know existed, including the above.

I had always assumed that the first Calbee baseball cards were the 1973 set because....well, that's what everyone says.  But one seller has been listing cards from a 1949(?) Calbee set that I had never heard of but which appears to be legit (not sure if Engel catalogues this?)

In 1949 Calbee wasn't actually called Calbee yet, it was founded as the Matsuo Food Processing Corporation in that year.  One of its main products though was a snack called Calbee Caramel.  The word "Calbee" is actually a portmanteau of the English words "Calcium" (cal) and "Vitamin" (bee, the closest Japanese comes to "vi") - in the immediate postwar period the population was severely malnourished for a few years so any product that offered these was a guaranteed sale.  The company changed its own name to Calbee in 1955. 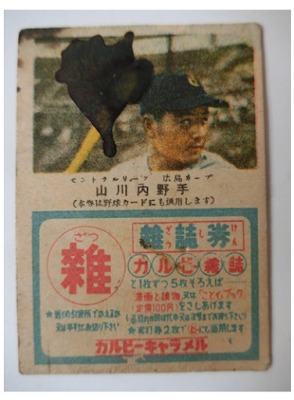 The card features Tetsuharu Kawakami on the top and a redemption offer for Calbee Magazine (send in five coupons from them and they'll give you a children's book for 100 Yen) is on the bottom. 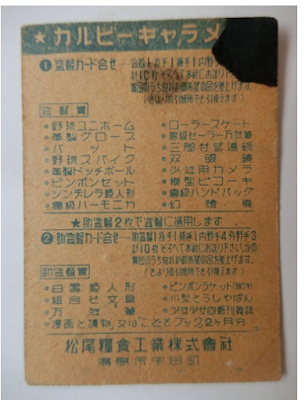 On the back it says "Calbee Caramel" across the top, and identifies Matsuo  Food Processing Corporation on the bottom (with some biographical text about Kawakami in the middle).

The cards are pretty small, about 5cm top to bottom (about the size of 1980s Calbees).  As you can see this Kawakami is in pretty rough shape, with a huge ink blot on both the front and back.  Despite this, bidding is already up to 9500 Yen and counting with 3 more days on the auction.

I'm not sure if the set was issued in 1949 (the listing is a bit vague on this point), but given the use of Matsuo Food Processing as the corporate name it must date to sometime between 1949 and 1955.

The design of these early Calbees seems to have varied widely based on some other cards from the same period that are up for auction right now, like this one of Kotsura of the Carp: 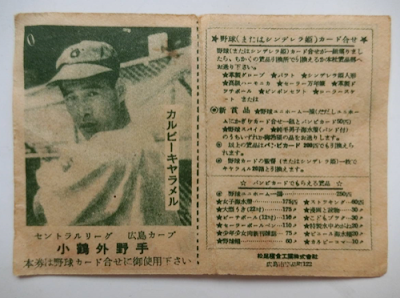 And this one here of  Hirai of the Giants 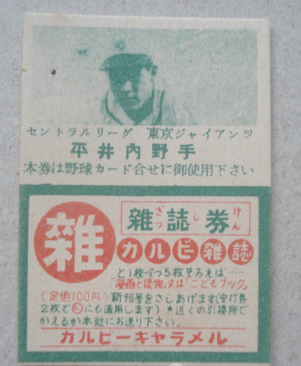 And this one of Fujimura of the Tigers (this auction finished a few days ago at 10,500 Yen): 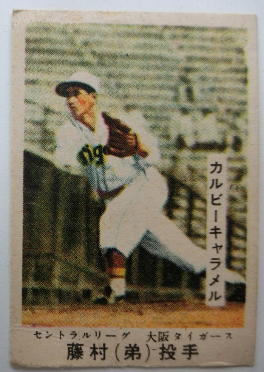 In all my years of browsing Yahoo Auctions I've never seen these cards before, the seller must have lucked into a small cache of them.  Judging from the prices they are realizing collectors are aware of them and getting into mini bidding wars on them, which is putting me off of getting one for myself (much though I want one now that I know they exist!)
Posted by Sean at 8:06 PM