Stuff I found at my parent's house 1: The oldest card in my collection. 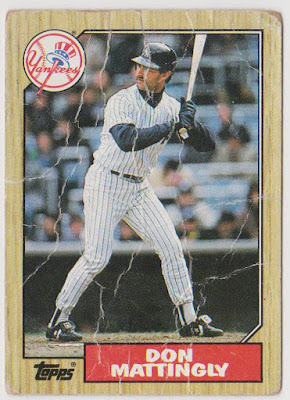 I just got back from a 3 week trip to Canada (hence the lack of recent posts) to visit family.  It was a great time, its been almost 3 years since my last visit which is way too long.

As always, while at my parent's place I got the chance to rummage through my old stuff that they have in storage (a tradition that will end next year, I've been given a "we don't want to store your crap anymore" ultimatum which I'll be complying with).  This year I made a particular focus on salvaging some stuff from my old baseball card collection that I amassed in the late 80s/ early 90s.  I already thinned it out a few years back by dumping a few monster boxes full of 1989 Donruss commons and the like, but still found a lot, some of which I brought back to Japan with me for the purposes of doing blog posts about them.

I decided to kick off the "stuff I found at my parent's house" series with this 1987 Topps Don Mattingly that would probably get a PSA grade of about negative 3 if they went that far down.  Despite it having no collector value, its one of the most important cards in my collection - its the "oldest" card in my collection in the sense that it was one of the first cards I ever got.

In 1987 I was a 10 year old living in Hutchenhausen West Germany and attending an American school on Ramstein Air Force base nearby.  All the boys in my grade were super into baseball cards that year but I didn't have any and couldn't get any (not a huge hobby in Germany back then...or today I guess).  So I had to acquire them from other kids on the playground who had brought their collections over from the US (being Canadian I didn't collect baseball cards before entering the American system so I didn't have one to bring over with me).  I did this either through bartering other things of value, or outright buying them from other kids by skimping on lunch and using the spare change I saved.  I don't remember which card was the first I ever got, but this 1987 Mattingly was one of them, and along with a 1987 Fleer Dwight Gooden (now lost) it was the centerpiece of my collection (which only had about 40 cards in it in its German peak).

Mattingly was my favorite player and I carried this one with me every day to school that year, which is how it came to have so many creases in it.  This was a bit irrational since at the time I had never even seen him play (we couldn't watch games over there), but everyone else liked him and he appeared in an issue of Boy's Life that I had, so he was my favorite.

So whenever I see this card it reminds me of the playground at Ramstein Elementary School in 1987, which was a pretty fun place to be a kid.

Anyone else fish anything out of their parents' place which brought back memories?