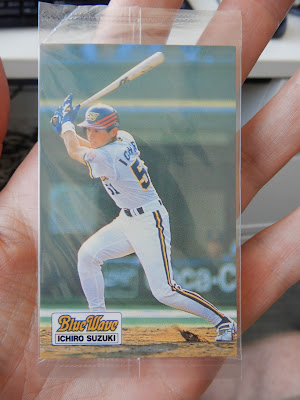 I mentioned in an earlier post that I have been collecting 1995 Tokyo Snack which is kind of Calbee's flagship set of that year.  The other set that Calbee released was its Choco Snack set (which as the name implies, came with a product called Choco Snack).  The Choco Snack set was only released in Tokyo and Saitama, though despite being a limited regional issue they seem to be only slightly rarer than the Tokyo Snack (though it is worth mentioning that Tokyo Snack is pretty hard to find).

My Tokyo Snack set is coming along nicely but I only have one card from the Choco Snack set; Ichiro Suzuki (C-32). 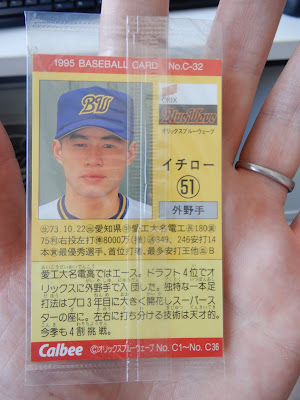 Ichiro appears on two cards in the set (this one and C-4).  The cards have two versions, one with the player name on the front in black lettering and another in gold, which is the more valuable of the two (as you can see, my Ichiro is the black lettered version).

Also as you can see my Ichiro card is still in the original baggie it came in.  This is something that sets the Choco Snack set a bit apart, it is probably the only Calbee set to have been issued in clear packs so you could see who you got.  I'm guessing these were distributed inside the packages of Choco Snacks so as to prevent cherry picking back in 1995, though I'm not certain of that.  Anyway, due to this its actually not uncommon to find cards from this set on Yahoo Auctions still in their packs - I guess people figured they might as well keep them in there!

Anyway, with Ichiro retiring I've decided its high time I started tracking down some of his harder to find Calbee cards from the 1990s and this is one of them (the 1994s will cost me way more).  I like seeing the awkward looking young Ichiro in his Blue Wave uniform, it really brings me back to my first year in Japan when I lived just outside of Kobe and went to see him play at Green Stadium.