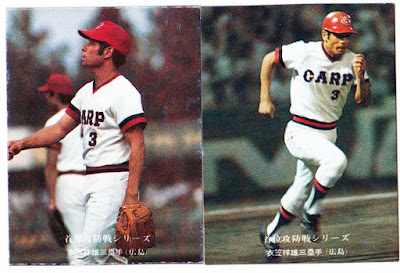 As I mentioned last week I am seriously pursuing the monster 1975-76 Calbee set as an active collecting project.  To prove my determination I present my latest pickups: Sachio Kinugasa cards #146 and 180 from the set.

These only get me 2 cards closer to the 1472 in the set, but these are important ones as they are both from the rare series that runs from card #145-180 which were only distributed in Hiroshima and (along with the other Hiroshima and Nagoya only regional issues) are the hardest to find and most expensive in the set. 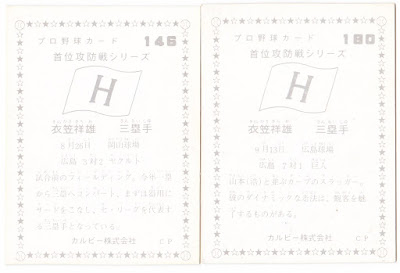 The card designs are the same as the rest of the set.  Each card features a scene from a specific game in which the Carp defended their lead in the Central League (which is the theme of the series).  Card 146 features a game played on August 26, 1975 in which Hiroshima defeated Yakult 3-2, interestingly played at Okayama Kyujo, which is home to neither team.  Japanese teams often play a few games each year in local stadiums in their region which don't have their own teams and Okayama is right next to Hiroshima so this must have been one of Hiroshima's local series (hence Kinugasa in home uniform).  The image itself was taken during pre-game fielding practice.

Card 180 features a game played on September 13, 1975 in which the Carp defeated the Giants 7-1 at Hiroshima.  The card back also tells us that Kinugasa is one of the Carp's sluggers along with Kouji Yamamoto and that his dynamic running style is impressive to spectators.

This is the sort of hyper-detailed card - commemorating individual games - that goes along with a 1472 card set!
Posted by Sean at 8:53 PM