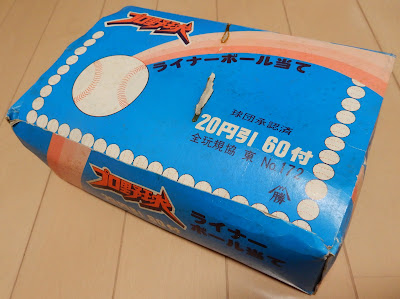 As I mentioned in a post last month I have recently developed an interest in Yamakatsu cards, particularly the 1979 and 1980 sets which are a bit smaller sized.  I was browsing Yahoo a couple weeks ago for acquisitions and came across the coolest thing: an unopened box of 1980 Yamakatsu packs.

I've seen the odd unopened pack of these pop up from time to time but have never come across a whole box of them before, so I put a bid in and ended up winning by a hair. 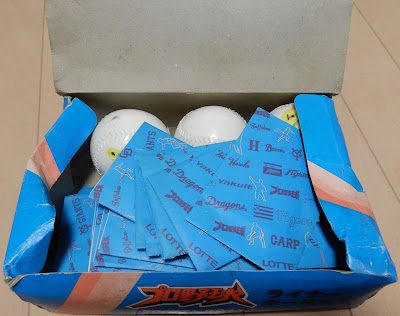 The box is not quite complete.  As it says on the front, originally there were 60 packs for sale at 20 Yen each.  My box has only 50 packs, so whatever store this sat in back in the day must have sold the other 10.

The packs come with 3 cards each so I now have 150 cards (in addition to ten that I already had).  There are only 64 in the set so I likely have all or most of the set already! 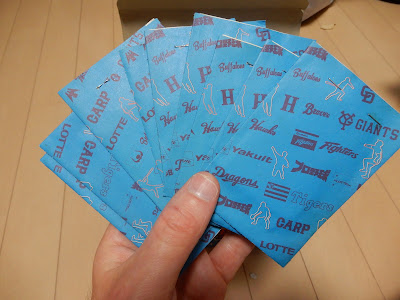 The packs are made of paper and decorated with the team logos.  They are stapled shut at the top end.  This looks like it would invite cherry-pickers to try to pry open the tops and have a peak at the cards but its not possible to do this (I tried, they are in there pretty good)! 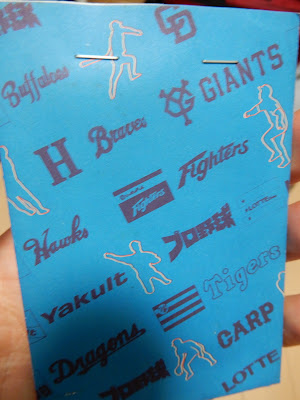 You may have noticed in one of the above photos that there appears to be three baseballs in the box.  That is because there are three baseballs in the box.  On the cover of the box it says ライナーボール当て which means "Win a Liner Ball"!  These would have been prizes given out by shopclerks to kids who pulled "当たり" (atari) winner cards.  I am not sure if the boxes came with just three or if there were originally more and some were already given away, though it doesn't appear that you could fit any more into the box so I'm guessing three is complete.  Each Liner Ball has a picture of a player on it.  I haven't taken the time to figure out which three players I got but one from the Carp, Tigers and Giants.  The balls are made of soft rubber and are pretty neat, I've never seen them before and I assume since most of them have long since been played with they are probably considerably harder to find than the cards themselves. 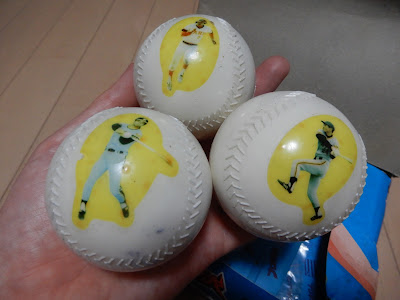 According to the seller there were also two atari winner packs of cards in the box.  I assume that those were these two packs, which being wrapped in plastic are the only ones distinguishable from the rest.  The seller said there were originally three of these but one is missing, presumably claimed by a kid back in the day.  I'm not sure how the atari winner card system worked, perhaps kids could choose between getting a liner ball or a pack of cards, or maybe the atari winner cards themselves state that?  A subject for future research (unless any of you can tell me). 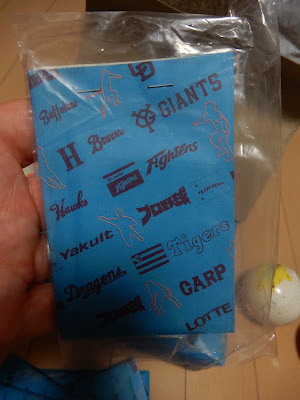 The 1980 Yamakatsu box comes with all you see here (and ten more packs): 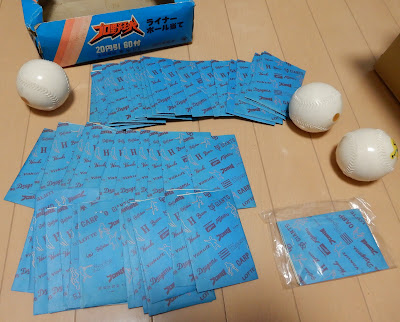 So there you have it, probably this is the coolest vintage thing that I have in my collection now.  I have not opened any of the pack in this nor do I intend to - they've survived almost 40 years in this condition and it would be almost sacrilegious to open them, given how few probably are out there. Also the cards themselves are, while not super common, definitely obtainable for a reasonable price.

I do really want to open them though.  It just feels weird trying to leave packs unopened.  I am going to have to work hard at this.

For a great write up about all of the Yamakatsu sets of the late 70s-early 80s, see NPB Guy's article here.
http://japanesebaseballcards.blogspot.jp/2012/04/yamakatsu.html
Posted by Sean at 7:22 PM