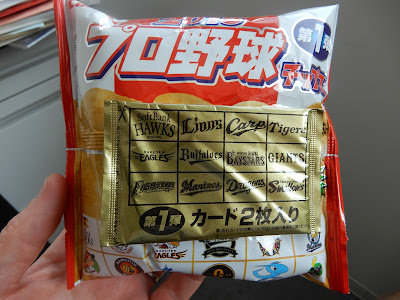 The first series of 2018 Calbee cards hit store shelves the other day and I picked up my first 88 Yen bag of them at my local grocery store yesterday!

I love the "first bag of Calbee Yakyu chips" day, each year its timing roughly coincides with the start of spring, the cherry blossom season, 20 degree days, the end of the Spring Grand Sumo Tournament (Kakuryu won) and of course opening day.

In a shocking and unexpected twist both the bags of chips and the cards themselves look basically exactly the same as they have every year since I bought my first bag 18 years ago!

Well, there is one cool change that I like, they brought back having the player's name written in Japanese script on the card fronts!  They did that with the 2016 set too and I was super excited about it at the time, but then the 2017 set reverted to having the names in Roman letters, which I didn't really like.  Maybe they are going to do this with even numbered years from now on or something?  I'm not sure why they've been flip flopping but I'm happy to see that element of the design back for this year regardless.

Anyway, my first bag netted me a checklist C-1 featuring the Hawks celebrating their championship (which reminds me how much I miss living in Fukuoka) and the regular card of the Baystars' Joe Willard (54).. 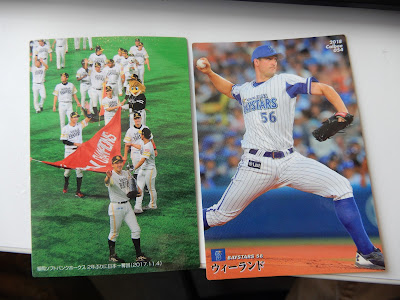 The card backs are pretty much the same as they ever were: 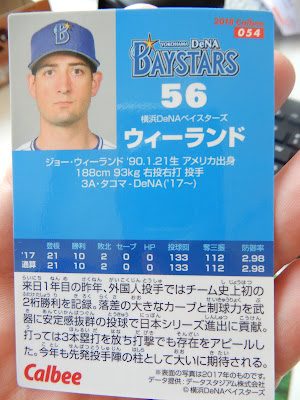 So that is one event in the 2018 calender ticked off.  I'll probably try to find a cheap starter set on Yahoo Auctions and work from there on completing this years', its a lot cheaper and involves way less crumbs than doing it bag by bag (though I'll pick up a few more here and there as the season progresses!)