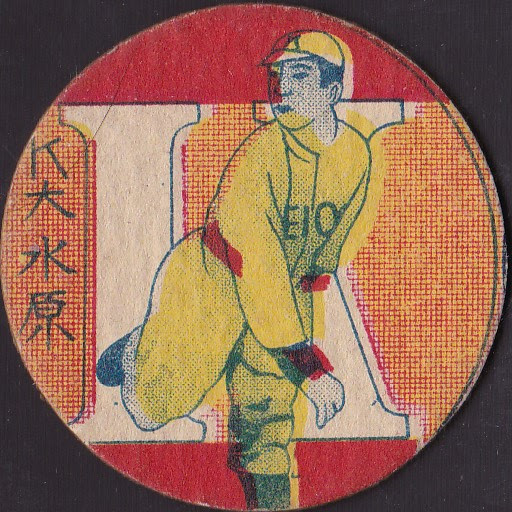 The above card features Hall of Famer Shigeru Mizuhara from the 1930 JRM 42 Menko set.

This is the second card I have from that set, after my Saburo Miyatake which I wrote about a few weeks back.  Its an extremely rare set, one of the first baseball menko card sets ever made in Japan, and Engel gives it a rarity factor of R5 (less than 5 copies of each card known to exist).

As with my Miyatake, this Mizuhara seems to have a couple of variations.  The one I have features a "K" (for Keio University, where he played at the time) against an orange stripe, with a red background on the top and bottom.

In Engel though they have a picture of the same card which is identical except that it has a solid red background. Mizuhara is a pretty interesting guy (who, strangely, doesn't even have an English wikipedia page).  He was a star pitcher for Keio University in the late 1920s. He also played against the MLB all stars that toured Japan in 1931 and 1934, then joined the Giants, as a third baseman, in 1936 and became one of the first star players in Japanese pro baseball.

The war disrupted his career more than most, he went to fight as a member of the Japanese Imperial Army on the Asian mainland after the 1942 season (in which he won the League MVP award but it seems wasn't able to actually receive it) where he was later captured by the Soviet army and ended up spending several years as a prisoner in Siberia.  He didn't return to Japan until 1949 by which time he was too old to resume his career.  The following year though he took over as manager of the Yomiuri Giants and led the team throughout the entire decade, winning four pennants and becoming the first pro manager of Sadaharu Oh and Shigeo Nagashima towards the end of his tenure.  He had later stints as manager of the Flyers and Dragons before retiring in 1971 with 1586 career victories.  He was selected to the Hall of Fame in 1977 and passed away in 1982.

One interesting thing I'm interested in researching is that he was married to Junko Matsui, who was a very famous movie actress from the 1930s.  Menko makers also used to put out a lot of sets featuring film stars and I'm curious if there are any of her (haven't been able to find any so far, but haven't looked much either, non-sports menko are basically all completely uncatalogued).  It would be kind of neat if both husband and wife appeared on cards from this vintage!