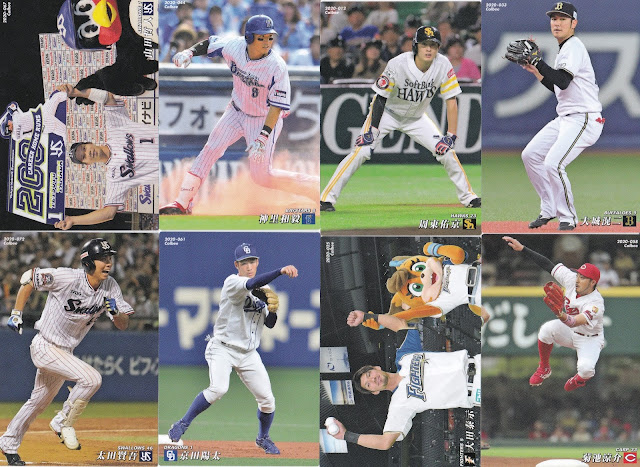 I decided to do my usual thing this year and buy the Calbee set off a re-seller on Yahoo Auctions rather than try to put one together by hand.  This is not a hard decision to make, as I've calculated on here before it could set you back about $2,000 to complete a series of Calbee cards if you do it bag by bag.  These cost me $4 plus $3 shipping.  The economic logic herein is that the re-sellers only break cases of these to get the rare inserts and treat the base set as more or less junk, so its great for those of us who don't care about the inserts.

One thing I was happy to see is that Calbee's photography wasn't as horrible as usual this year.  Dave had mentioned this to me earlier and I was happy to see it with my own eyes: there are actually a few pictures in this set of players doing something other than batting or pitching.

Its really refreshing to see some pictures of guys running the bases, playing the field or just messing around with the mascot or whatever. I put 8 cards from the base set which have pictures like that up above.  The subsets, which Calbee has always generally used better photographs for, also have a lot of good shots in them, here are a few: 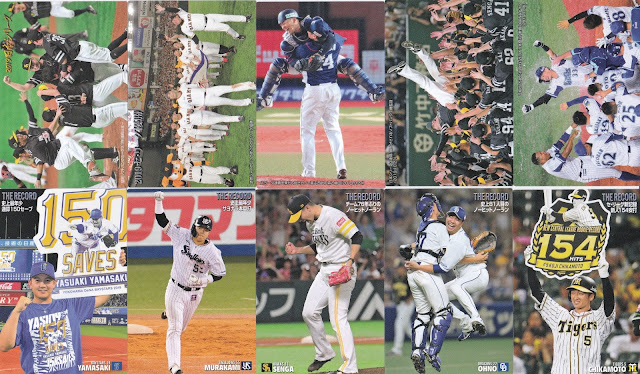 Looking at these cards makes me hope they are able to salvage at least part of the season this year, but it doesn't look good. They indefinitely postponed the opener this week and don't plan on having one until June at the earliest, so at best we might get a very shortened season, much of which will probably be played in empty stadiums.

This leads to an interesting question for 2021 baseball sets both here and in the US: if there is no season this year, what are the pictures on next year's cards going to look like?  Are they going to use photos from 2019?  Or maybe push back the releases so they can get some photos in spring training in 2021 (assuming that goes ahead)?  Are we going to see the return of some 70s style airbrushing of old photos to replace logos on cards of players who have been traded?  Or if we do get at least a partial season this year, are the cards next year going to have a lot of photos of players taken in front of empty stands?  Or wearing face masks?

I guess we'll find out next year.

Email ThisBlogThis!Share to TwitterShare to FacebookShare to Pinterest
Labels: 2020 Calbee