The Hanshin Tigers take the field to brighten your spring!

Doesn't that sight cheer you up?

It just doesn't feel like spring without baseball players on the field.  So I thought we needed some.

With my kids home I've taken to giving them little Pokémon figures every day as a reward for being good.  I have a stash of them that I keep in my office. The other day I was getting low on Pokémons so I stopped at a big second hand store which sells huge bags of them very cheaply to re-stock.  While grabbing a bag of Pokémon I noticed this on the rack next to it. 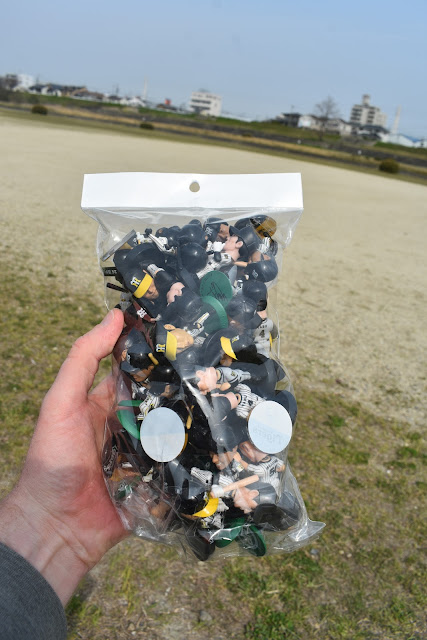 That is a package jam packed with Hanshin Tigers figurines, several dozen of them. Look at how tightly squeezed they are in there: 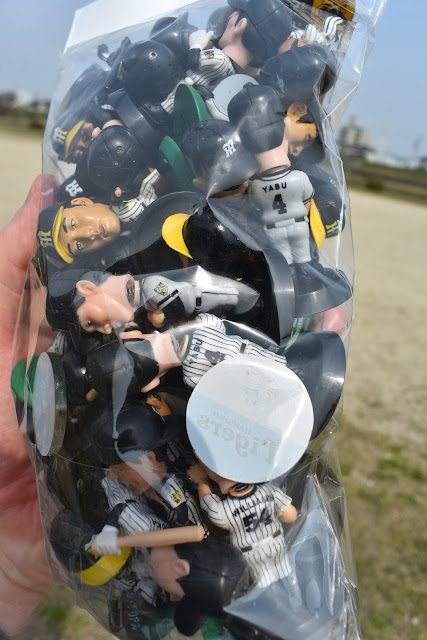 I don't normally collect figures but this was a bargain I couldn't pass up: the whole thing only cost 380 Yen!  That is about 3$ US.  Don't tell me you would have walked out of that store without these guys if it had been you!

So I've had this bag of Hanshin Tigers sitting unopened in a cupboard for a few days.  Today is a really nice spring day, sunny and warm.  The day you want to see baseball.  I ride my bike my work now to avoid the trains and I decided kind of on a whim this morning to take them with me and do a location photo shoot at a baseball field that I ride past during my commute.

Behold the splendor of baseball played before a backdrop of Nagoya's suburban sprawl! 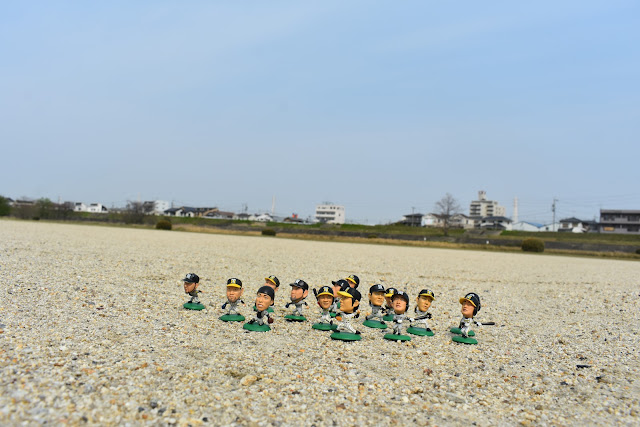 I didn't know exactly what I had until I sat down at the ball field and opened the bag up, which made for a bit of fun.  Turns out there are figures from 3 different sets in there, without doubles which is a real plus.  The ones pictured above with the green bases are the "Hanshin Tigers Chibi Pro Figures" which seem to have been released in 2007.  There are a few of them up for auction on Yahoo Auctions right now, it looks like they were sold individually back then.  It looks like there were 26 in the set, I think I am a couple short (the photos don't have all the ones I got though).

Next up are these awesome guys: 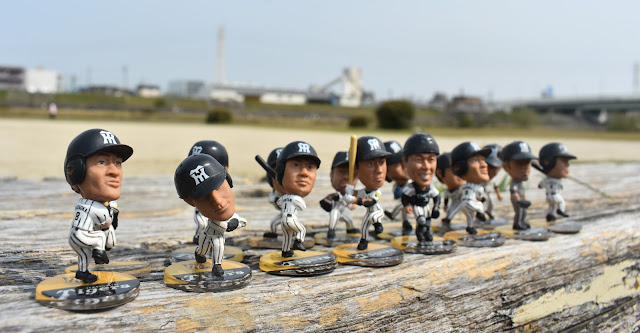 They look like they are having a great time on that bench. 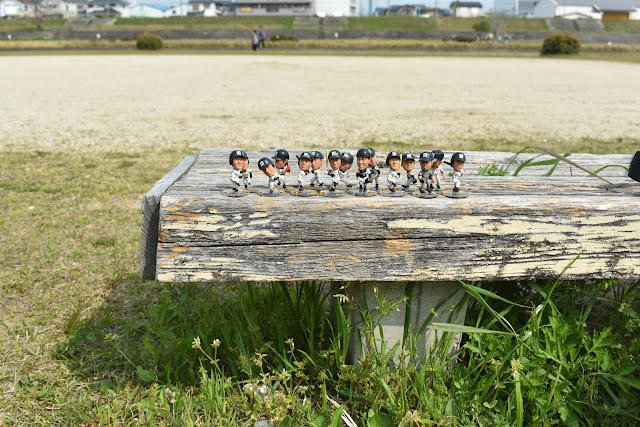 They are pretty easy to identify by the yellow and black bases they have. 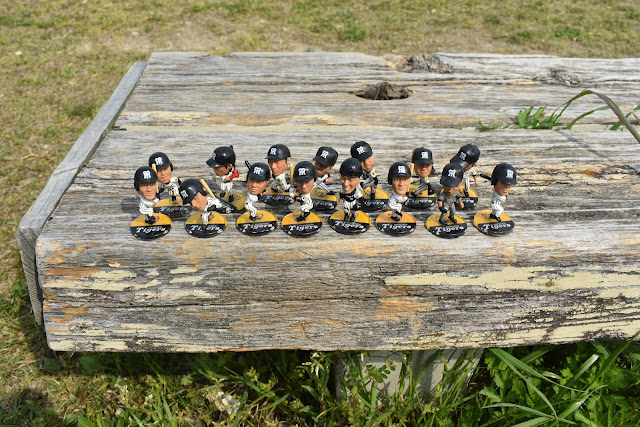 The third set were the only ones that were bobbleheads.  Yay, bobbleheads! 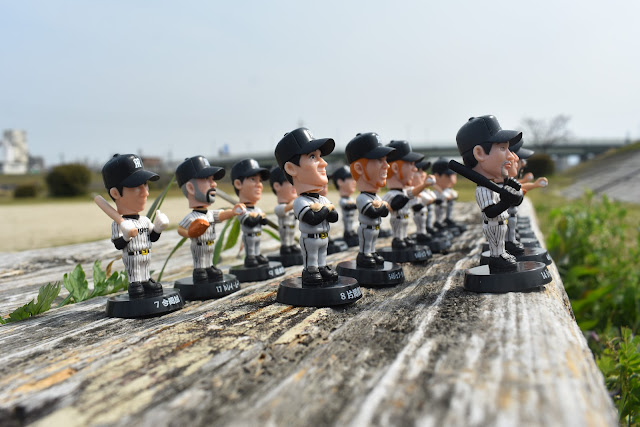 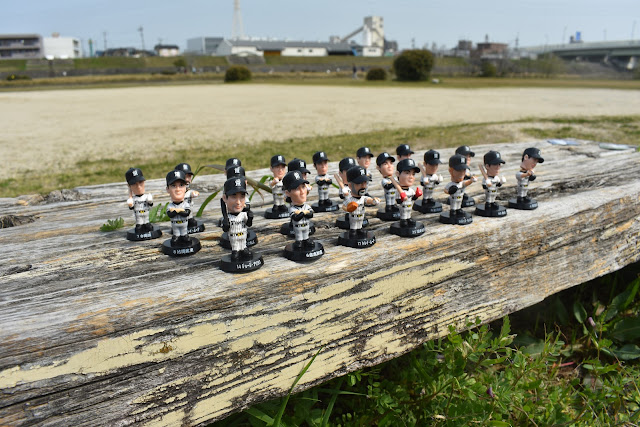 I haven't actually been able to find any information about these guys.  My Google searches for Hanshin Tigers figures or bobbleheads in both English and Japanese don't produce any results that match them.  They are pretty decent quality and from the player selection were likely sold in the early 2000s (Trey Moore, who played for the Tigers from 2002-2003 is among them for example).  That really brings back good memories for me since I was living in the Kansai region back in the early 2000s and was a Tigers fan at the time (still am really, but feel obliged to root for the Dragons now that I live in Nagoya).

Anyway, this kind of illustrates why second hand shops in Japan are so awesome, you can find treasures like this for insanely low prices sometimes - these probably set the guy who originally collected them back a couple of hundred bucks, but are now mine for only 3!

My photo shoot also resulted in an unexpected bonus, I actually found some baseball cards!  Like literally just lying there on the ground right next to the bench where I took the above photos. 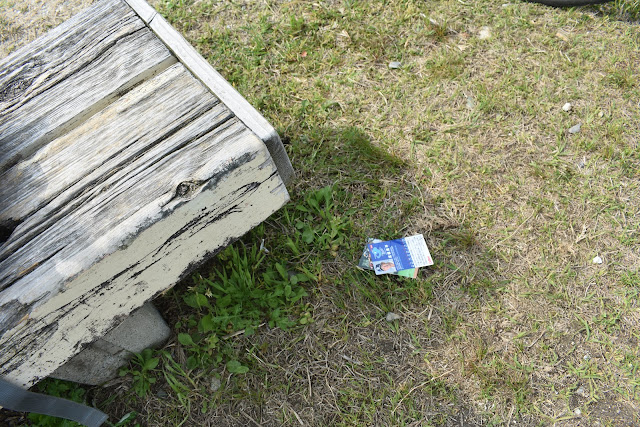 That is two cards from Series 1 of the 2020 Calbee set which I happen to be working on!  What are the odds?

I picked them up and found Shohei Takahashi and Yoshiyuki Kamei staring back at me.  They were a bit damp with morning dew on them but the coating on the cards prevented that from seeping into them. I guess somebody ate a bag of chips there, opened the cards and thought "Not interested" and just left them there. I need both of them so I dried them off and put them in my bag.  This is the weirdest way I've ever been able to knock cards off a checklist, but I'll take them. 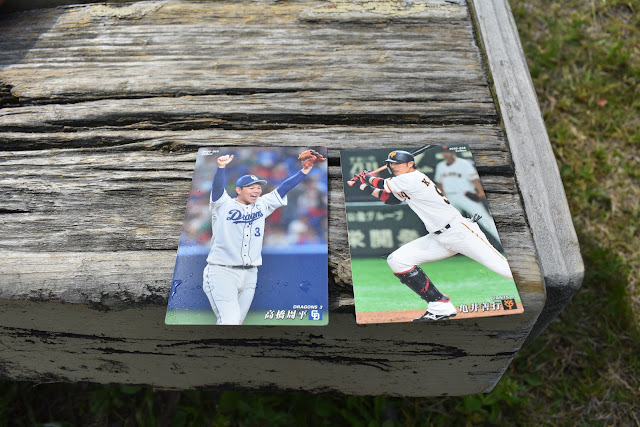 So anyway, this was my morning attempt to bring some baseball into spring.  Looks like we might need some follow ups in the summer with the way things are going unfortunately.  Stay safe!