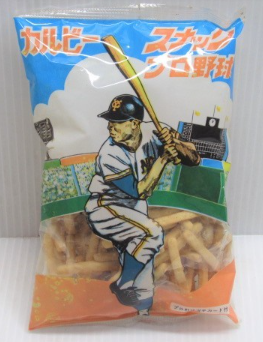 One interesting thing that is up for auction now is a bag of 1975 Calbee Pro Yakyu Snacks.  These were the snacks that the early series of the Monster 1975-76-77 Calbee set were originally sold in.

The text on the back says:

-If you get a Home Run card you can receive either an "Album" (for putting cards in) or a "Pro Baseball Book".

- The Pro Baseball Book contains an introduction to all the players on both Central and Pacific League teams in 1975, a game schedule, stories about major records and famous players, baseball history and its rules. 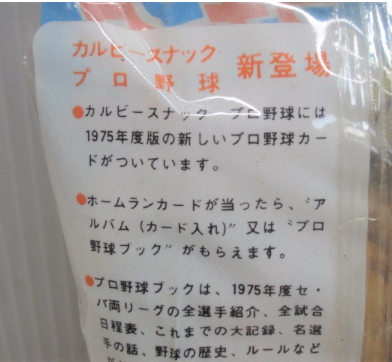 Its neat to see how the cards were sold back in the day.  They were "snacks" rather than chips like they have been for as long as I've been collecting.  They also didn't come attached to the bags then like they do now, you'd get them separately at the cashier when you bought a bag.  That means that this one unfortunately doesn't come with any cards for the 9500 Yen (almost 100$ US) price tag, so I think I'm going to pass on it.

The seller helpfully reminds potential purchasers that these 45 year old snacks are not for eating, just for collecting.
Posted by Sean at 7:14 PM