Have I Somehow Screwed Myself Over (Japanese Card Collector Edition)? Its been a few months since I did an update post on my monster 1975-76-77 Calbee set.  There are a lot of reasons for that but the main one is simple: I haven't made any progress in that time on it.  I'm stalled at a little over 70% of the way there.

The frustration at the drying up of the well of cards-that-I-need has caused me to question whether this might actually be 100% my own fault.

Basically my question boils down to this: Did just me buying up cards for this set cause the prices to explode?

Normally this wouldn't be possible, but this isn't a normal set. There aren't a lot of people out there collecting it, and there also aren't a lot of cards from this set on the market.  Low demand but also low supply.  When that type of market exists, even just having one more person enter it can have a huge effect on both supply and prices.

I went on a real tear for a year or so, roughly from mid-2018 to mid 2019, buying up as many singles for the set that I needed as I could find, particularly focusing on the scarce regional or short printed series.  I made good progress, I have more than half of the Dragons and Carp regionally issued series from 1975, and I made some progress on the Carp regional issue from 1976 (the Red Helmet Series) and also the high number series (1400-1436), but still have a lot of holes in those that I need to fill, as I outlined in a previous post.

Now though you can't get those cards for those prices anymore.  The 1975 regional issues have starting prices about 2,000 Yen each, doubled in a year, and I can't find any of the 1976 Carp issue for under 10,000 Yen (though these are through a seller with very high starting bids.  Still, even in an auction with a low starting bid these cards go for way more than what I was paying last year for them).

With more commonly available cards it would be unlikely for a single buyer to have much effect on price.  But with cards like this, I have this feeling: 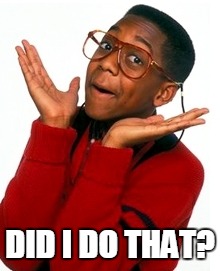 I think when sellers see a given series of cards being bought up at 1,000 Yen each, and there are only a handful of them available at any time, they take that as a sign that they are undervalued and up their prices accordingly.  I know for a fact that some of the sellers I bought from did this (and I don't blame them, I'm just observing that this is what they did).  Likewise having another determined buyer competing in auctions forces the other bidders to up their high bids if they want to win, which also has an inflationary effect.

You wouldn't see one person having this effect in the market for more readily available cards, like say US cards from the 50s or 60s, but with the extremely limited number of 1970s Calbee cards out there for auction (a large proportion simply aren't available at all at any given moment on Yahoo Auctions and the ones that are generally might only be 1-2 copies of it) the market is quite different.

So I'm pretty sure I'm personally responsible for having made these cards more expensive, which is a double edged sword.  On the one hand, it kind of validates my earlier purchases since they are selling for more than I paid for them last year.  But way worse than that, as a set collector, it means that buying the remaining cards that I need is going to be a way more expensive task than I had been planning for it to be!
Posted by Sean at 6:31 PM