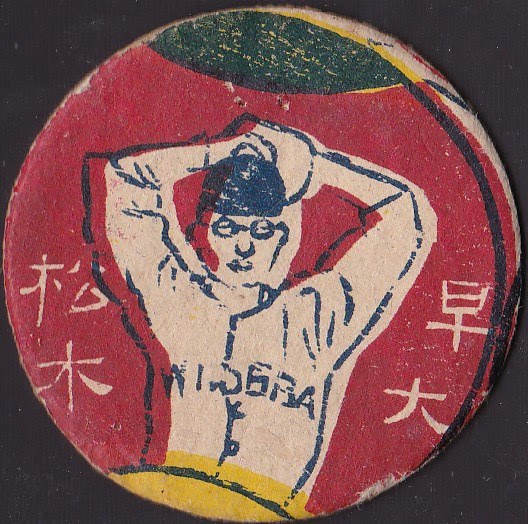 In my previous post I talked a bit about this pre war menko I recently acquired. I identified it as  Kenjiro Matsuki on the grounds that the card says "Matsuki" and he was the only player with that name which I could find from that era, and the the fact that he wore glasses and looks quite a bit like the player depicted in the image.

What confused me though was that the card also clearly says Waseda University (the kanji on the right hand side of it), which Kenjiro Matsuki never attended (he went to rival Meiji University). I chalked this up as an error.

Then Prestige Collectibles contacted me on Twitter and pointed out that there was actually another guy with the same last name, Yoshio Matsuki, who was recorded on Waseda's roster from the same period (these rosters aren't available online, he literally had to look that up in an old paper copy - old school research is the best!).  So in all likelihood the card was not an error, but simply featured a different Matsuki!

I appreciated the work that went into tracking him down since  unlike Kenjiro Matsuki (who went on to play professionally and ended up in the Hall of Fame) Yoshio Matsuki is a pretty anonymous guy.  He never played professionally and Google searches for anything about him in Japanese turn up zero information.  Other than the fact that he was a pitcher for Waseda University between 1929 and 1933 we don't know anything about this guy.  I can't even find out if he wore glasses!

In some ways this makes this card even neater - its got to be the only card of this guy in existence.  I mean that literally, there is just one known copy of this one card of this guy who we basically know nothing about!  This is not something you can say about many cards!

Also I like the fact that I have a 100% global monopoly on Yoshio Matsuki cards, so anyone trying to collect this guy has no choice but to go through me.  I'm both literally and figuratively holding all the cards in any negotiation with such person were they to ever exist.  Ha.  Makes me feel very special :)