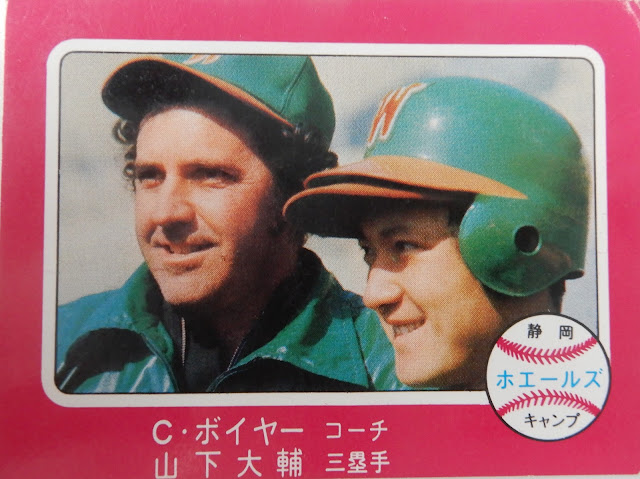 I picked off another card on my 1975-76 Calbee want list last week: 374 featuring Clete Boyer and Daisuke Yamashita of the Taiyo Whales.

Boyer is, with Matty Alou and Dave Johnson, one of the most famous foreign players to appear in the set, and unlike those two he appears only on one card (which he obviously shares) and did so after his playing days were over (1975 was his last as a player, he appears here as a coach). 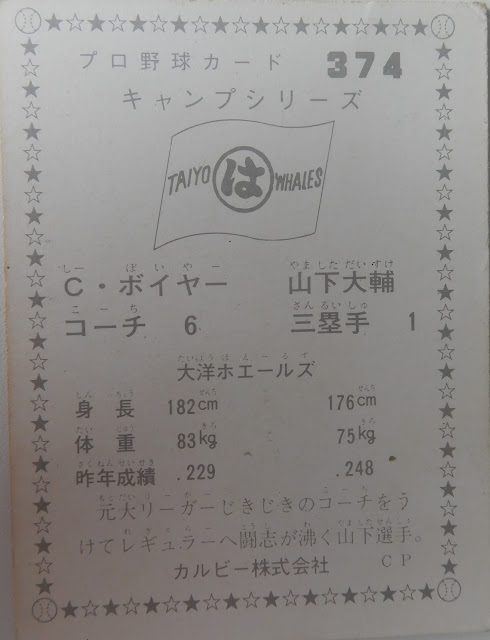 Boyer features a bit in Robert Whiting's You Gotta Have Wa, mainly mentioned as one of the few foreign players who were able to fit in in Japan, hence his reward of a coaching position at the end of his playing days, which this card commemorates.

So this is kind of a cool card for that reason.  Its a bit hard to find, though it wasn't short printed it seems to be popular among Japanese collectors too since it doesn't show up in auctions as often as other cards from the same pink-bordered series.

Incidentally, there seems to be a huge error on Clete Boyer's Wikipedia page which I came across while writing this post.  It says there:

"he played professionally for the Taiyo Whales from 1972 to 1975.  His roommate was Sadaharu Oh."

Obviously Sadaharu Oh didn't play for the Whales in those (or any) years, so I have no idea where the author got that info.  There is a footnote to an obituary of Boyer as a supporting reference, but that says nothing about being Sadaharu Oh's roommate either (EDIT: Actually, it does contain a quote from Tony Kubek to that effect which I missed, see comments below).  Not sure what is going on there.
Posted by Sean at 8:54 PM