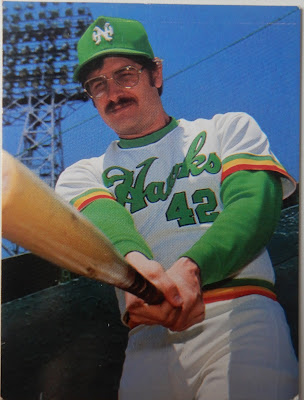 This card is awesome on many levels.  The player, whose name I'll get to shortly, has the perfect 70s tinted cop glasses/moustache combo I have ever seen on a card.  He kind of reminds me of Father Guido Sarducci, just with slightly shorter hair and in a baseball uniform.

The best part of this card though is the player's name. In 1979 Calbee didn't put any writing on the front of a lot of cards, making them look very similar to the 1978 Yamakatsu set.  On the back though you can find out the name of the player and this guy is: 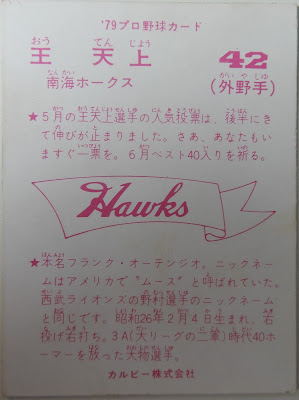 This took me aback a bit.  The guy looks like a foreigner.  And 王 天上 isn't really a Japanese name either, but it is written in kanji.  It means "King above heaven".  The 王 character is the same as Sadaharu Oh's last name, which is not commonly used in names in Japan.

Looking at the fine print lower down on the card clears up the mystery though.  This is Frank Ortenzio of course!  (Incidentally, the perfect name for a guy with the perfect 70s cop glasses/moustache combo too).

His kanji name 王 天上 is actually a play on his last name - it is read Ou Ten Jo, which if you say it fast sounds like "Ortenzio". He is probably the only foreign ballplayer to use a kanji name rather than having his regular name spelled out in katakana like everyone else.  According to his wikipedia entry this is also how he was referred to on scoreboards, and the team used it as his offical name.

It also made its way onto at least one baseball card of him! Probably the only one showing a foreign player's name rendered in kanji (except of course for those from China or other countries where kanji are used).

Ortenzio, who had breifly played in the majors for Kansas City, only played two years with the Nankai Hawks, 1979 and 1980. 1979 was his best season, hitting 23 home runs.

The card notes that he had another nickname, "Moose", which was the same as Katsuya Nomura (then playing with the Lions).

There is an interesting recent interview with Ortenzio here, most of it is about his minor league career but about 1 hour into it he talks about his time in Japan.  Some interesting tidbits:

1. The team gave him his odd nickname and he went with it (also, he definitely doesn't speak Japanese, he calls katakana "katakani" which is kind of endearing)

2. He likes the movie Mr. Baseball a lot and thinks everything in it is accurate except the idea of dating the manager's daughter.

3. He felt awkward playing in Japan due to the conflicting expectations placed on foreigners to both help the team win but at the same time not play so well that you show up the Japanese players (which seems to be a common complaint).

4. One frustrating incident happened in a game in which he saved the team's 1 run lead in a game by throwing out a runner at home plate (from the outfield).  After the game he was called into the manager's office expecting to be complimented for saving the game, but was instead chewed out for throwing home instead of to the cutoff man.  This was one of the experiences that made him feel like he didn't want to play in Japan anymore.

5. His wife was injured in an accident and moved back to the US to get treatment with their young daughter, which was a big factor in him deciding to retire mid way through the 1980 season.

6. His interpreter cried when he announced his decision to leave Japan.

7. He appeared on the cover of a Japanese sports magazine eating sushi.  He doesn't like sushi.

8. He had converted to Christianity before going to Japan and became a minister after going back to the US.