My Favorite Comeback in Baseball History on one Card 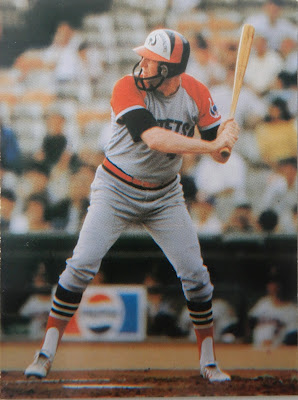 Charlie Manuel's legendary stint as Philadephia's manager is nowhere near to being his most impressive achievement.

If you haven't read Robert Whiting's You Gotta Have Wa, then get your hands on a copy, its the best book on Japanese baseball told mostly from the perspective of foreign players out there, even if it is almost 30 years old.  Manuel's story features prominently in it and always struck me as the most memorable.

After barely making a dent in a brief stint in MLB, he exploded with 42 home runs in his first season with the Yakult Swallows in 1977 and then one upped himself the next year by bashing another 39 and leading the team to a Nippon Series Championship victory.

The Swallows management, idiots, got rid of him after that season and he went to play for the Kintetsu Buffaloes in the 1979 season, where he got off to another monstrous start.

Then, something horrible was done to him.  Orions pitcher Soroku Yagisawa nailed him in the jaw with a fastball that broke the bone in six places.  According to Whiting, this was intentionally done and Yagisawa smirked while Manuel was carried off the field on a stretcher, vowing to kill Yagisawa. The doctors had to insert three metal plates into his head and remove some nerves.  Teammates reported that since he had no feeling in his jaw when he ate food would just fall out of his mouth and he wouldn't be aware of it, not being able to feel it sliding down.

Then one of the most impressive comebacks in baseball history happened.  Immediately after being discharged from the hospital, Manuel rejoined the team against the advice of doctors and family.  He went on a tear and despite missing several weeks while hospitalized won the PL home run title and led the Buffaloes to the Pacific League championship.

I'm not really doing the story justice here, you should read Whiting's account because it is definitely one of the best feel-good comeback stories in baseball that I've ever read.  He even got the chance to one-up Yagisawa, who appeared at a pre-game event with him and Manuel snubbed his offer of a handshake.

So anyway, let me get to this card.  It is a 1979 Calbee card that was in a lot of 20 1979 Calbees and was the sole reason I bought the lot (I'm not working on that set right now).  For a few days immediately after his comeback, Manuel wore a special batting helmet with a football style chin guard to protect his injured jaw.  This card actually pictures him wearing that helmet!  I think it is the only one of his cards that does, because he only wore it for a few days, discarding it because he found it was obscuring his vision at the plate.  So the photo on this card would have to have been taken right at the time when he had just gotten back, perhaps even his first game back after the injury. 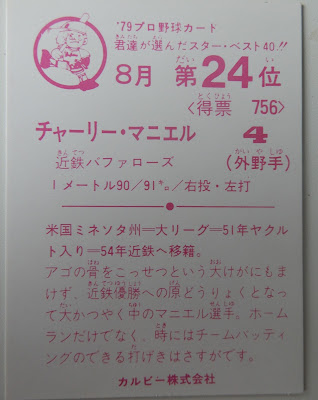 The back of the card even pays tribute to this, noting that despite suffering a serious injury to his jaw, Manual is striving with all his might to lead Kintetsu to victory this year.

And we now know in hindsight that he did.  And would go on, decades later, to lead the Philadelphia Phillies to a World Series Championship.

Yagisawa, on the other hand, would never pitch another game after that season and the last record of him according to Wikipedia had him working as a coach with a semi-pro team in rural Gunma Prefecture.


This is definitely one of my favorite cards in my collection!